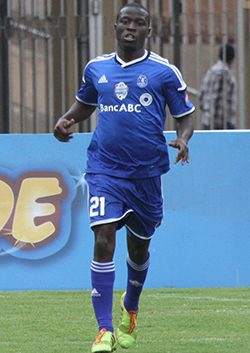 THEMBA Ndlovu’s reluctance to sign a new deal with Dynamos has been confirmed with the defender’s completed switch to Harare City.
Ndlovu has been roped in by City’s new coach Taurai Mangwiro who has raided his former club.
Mangwiro admitted admiration for Ndlovu.
“I am not at liberty to state the players we are targeting because most of them still have contracts with certain clubs. Besides, I am busy with other football matters so I cannot say anything,” Mangwiro said.
“I have always admired him. You will get to know other players next year. For now let us enjoy the festive season and talk football later.”
At City, Ndlovu will join a central defence set-up that include steely figures like captain David Kutyauripo, Arnold Chaka and Arnold Chivheya.
Mangwiro is said to be targeting midfielder Tendayi Samanja and goalkeeper Tafadzwa Dube, whom he worked with at Caps United last season.
Only vice-captain Thomas Magorimbo has penned a new deal at Dynamos with the future of numerous players in limbo.Advertisement