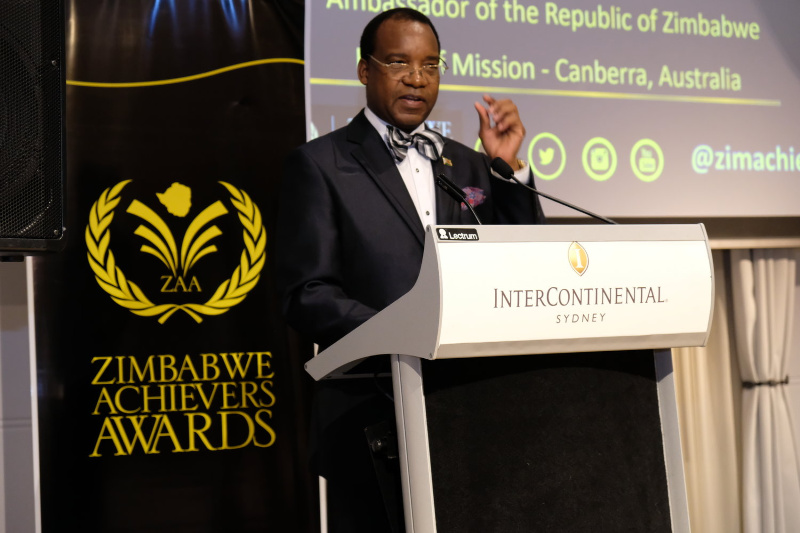 THE Zimbabwean diaspora community and friends came out in full force on Saturday night to celebrate some of the best achievers of the year at the Zimbabwe Achievers Awards (ZAA) Australia 3rd Edition.

Running under the theme, ‘Celebrating excellence and promoting the health and wellbeing of Zimbabweans in Australia’, the event was held at the InterContinental Hotel in Sydney.

This year’s edition was graced by Zimbabwean ambassador to Australia, Joe Tapera Mhishi among other distinguished guests.

The event saw the reunion of ZAA and headline sponsor, life insurance company ZororoPhumulani once more setting the platform to celebrate Zimbabwean achievers and coincided with the launch of ZororoPhumulani’s WorldWide Funeral Services (WWFS) plan which is targeted at the diaspora communities in offering repatriation and funeral services.

Method Mukundu, the ZAA Australia Country Director spoke on the theme in his opening speech.

“As we celebrate and honour those amongst us who have excelled, we also intended to highlight the importance of maintaining good mental and physical health, balanced finances and strong networks that can sustain a fully integrated, healthy and stable Zimbabwean Community in Australia,” he said.

The WWF Plan by ZororoPhumulani is powered by Doves to offer a diaspora-oriented funeral plan for those in Australia with packages including repatriation services and air tickets for two persons to travel with the deceased to Zimbabwe where Doves will take over from there till the final destination.

Notable amongst the winners was ZimGems Netball Team star Joice Mada Takaidza who scooped 3 awards in the categories of Sport Personality of the Year, People’s Choice and the Chairman’s Award to become the first recipient to earn 3 awards in one night since the inauguration of ZAA Australia in 2017.

Rising Zimbabwean born lawyer Harutsari Marunda picked up two awards; one on behalf of her law firm HCM Legal in the Business of the Year category and the other in her personal capacity as recipient of the Outstanding Achiever Award.

Completing the list of double award winners on the night was Simba Mushete who was awarded for excellence in the categories of Music Artist of the Year and Culture and Fashion Ambassador.

Lucky Ngoshi became the first recipient to win an award in each of the three successive ZAA Australia events after she clinched this year’s Female Entrepreneur of the Year award after being the winner of the People’s Choice Award in 2017 and the Philanthropic Leadership Award for her selfless community work in 2018.

The event was hosted by cybersecurity expert and author Phillimon Zongo with entertainment provided by the Echoes of Africa band led by Simba Mushete and gospel singer Nyarai Takaidza.

The ZimAchievers Awards have been a fixture on the diaspora social calendar since 2010 with editions in the UK, USA, Canada, Australia and South Africa taking place annually.

In 2020, the awards make their long awaited bow on home soil for the 10th anniversary celebrations and awards show at Elephant Hills Lodge in Victoria Falls on 10th April under the ZimThrive Homecoming initiative.

Business of the year – HCM Legal

Community Organization of the Year – Born to Shine