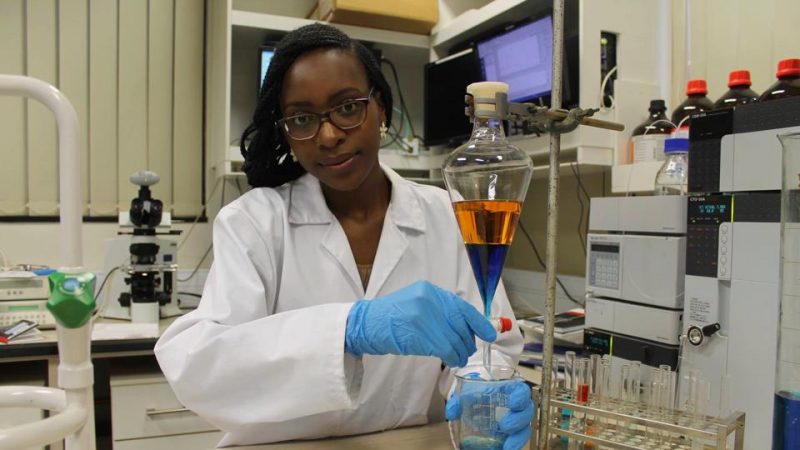 “By understanding their structure and reactivity, this helps in the design of chemical processes to maximize the sustainability of industrial activity,” she said, “The objective of my research is to reduce pollution at its source by minimizing time and material required to produce energy.”

Chiyindiko says this is particularly important in South Africa, where she is now based.

“South Africa is the world’s 14th largest emitter of greenhouse gases and like many countries have done, South Africa has pledged to peak its emissions between 2020 and 2025,” she said, “The coal chemical industry and transportation are two of the largest contributors to this greenhouse effect in South Africa due to their expulsion of air pollutants, which makes the emergence of green technology even more vital.”

On top of her scientific efforts, Chiyindiko is helping to bring to life a science-themed comic book.

“There’s a new superhero in town, and she’s a scientist!” Chiyindiko said, “The genesis of this project was aided by a Zimbabwean based graphic designer and illustrator, Allen Zvidzai.”

Chiyindiko said highlighting black women in STEM ensures the younger generations of women have role models to inspire them.

“This will also enable the world to recognize the obstacles that young girls aspiring to careers in STEM face and solve them,” she said, “As Captain Planet would always say: the power is yours!”

Having a science superhero for young black girls is needed because, Chiyindiko says, one of the biggest challenges for her, as a woman in chemistry, is representation.

“Women are highly underrepresented in positions of authority, such as tenured faculty positions, but you will also see this reflected in STEM cohorts and organisation,” she said, “Racial and sexist macroaggressions are also rampant in the sciences, and these macroaggressions, whether intentional or unintentional, expose hidden biases and prejudices that generally make women of colour feel undermined.”

Chiyindiko says her middle-class family in Harare, the capital city of Zimbabwe, had expectations that she would become a medical doctor, engineer, accountant, or a disgrace upon the family name.

“I am about to become a doctor, still, but not the kind my grandparents have in mind,” said Chiyindiko, referring to completing her chemistry Ph.D.

Chiyindiko says she was an inquisitive child, desperate to figure out why things worked the way they did.

“My favorite thing about my career is running experiments and observing different textured fumes, precipitates and crystals of different colours and even the bad-smelling compounds like Ammonia,” she said.

She says that as a kid, she identified with Captain Planet and the Planeteers.

“In my head, I was one of the Planeteers,” she said, adding this proves how powerful edutainment is in changing the world for kids and adults too.

“I was lost in one of my usual brooding sessions and imagined how cool it would be if I was an actual superhero,” she said, “If you see me during one of these sessions you’d think I’m contemplating the application of density functional theorem to metal complexation but most of the time I’m exploring the endless bounds of my humor and hyperactive imagination.”

Chiyindiko isn’t the only chemist from the global south looking to solve global problems. Colombian scientist Laura Loaiza researches how to move away from volatile and flammable components in modern batteries.

Loaiza, who is now a postdoc researcher at Chalmers University of Technology in Gothenburg says it is essential to find alternative battery technology derived from more abundant and cheaper materials.