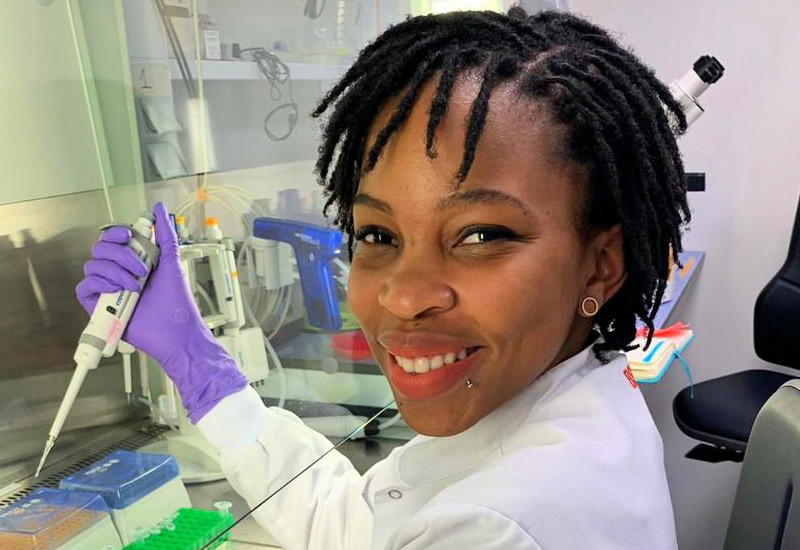 Nathasia Muwanigwa, a scientist originally from Zimbabwe is now helping scientists, engineering and mathematicians from across African continent to give them visibility and inspire future generations.

“After high school, I moved to Cyprus for a Bachelor’s in science in Human Biology, with the idea that the degree would be a pre-med degree,” she said, “But in my final year, I got to do my own research project at a leukemia research institute – and discovered my love for being in the lab.”

She was then able to study her master’s degree in a highly competitive program in the Netherlands, on a full scholarship.

“The financial support came at the perfect time because the economic situation in Zimbabwe was getting pretty dire and it would have been challenging if my parents had to pay the tuition,” she said, “I battled a lot of impostor syndrome during my Master’s because my colleagues were all incredibly bright and many of them knew the ins and outs of how research in academia work, and I was still rather clueless.”

Now, she is based in Luxembourg, doing a PhD where she studies the molecular mechanisms underlying Parkinson’s disease using human stem cell derived brain organoids (aka “minibrains”).

“A young girl from Zimbabwe should not feel that being a neuroscientist isn’t for her because of where she is from, her gender or her ethnicity.”

Muwanigwa says Africans are one of the least represented on the global STEM (science, technology, engineering and mathematics) landscape, despite making up 16% of the world population.

“Africa needs more youth to be interested in STEM fields, because these fields are crucial to the development of the continent,” she said, “We need people with the expertise to solve problems that are specific and relevant to the region.”

In order to improve the visibility of African researchers, Muwanigwa has helped create the site Visibility STEM Africa (VSA) and the Twitter handle @ViSTEM_Africa.

Muwanigwa says what they are trying to show is that representation and visibility matter.

“In recent years, we have been hearing about the importance of representation in mainstream media, in the fashion and beauty industry –STEM fields are no different,” she said ”We are providing Africans in STEM across many different disciplines a platform where they can network with one another and create new connections.”
Muwanigwa says the initiative will also show new opportunities for collaboration.

“The biggest opportunity I see is the potential for collaborations: In science, it has become increasingly apparent that collaborations are necessary for pushing the needle forward,” she said.

That’s not the only benefit to the initiative.

“Not only do we highlight Africans in STEM fields, we also have an Opportunities page on our website, where we link people to organizations or funding bodies that can help them find scholarships, funding etc,” she said, “We want to be able to empower Africans pursing STEM fields with information that could be useful for them to move forward in their careers.”

There are already thousands of scientists and other STEM workers doing great work across the continent and around the globe.

Just one of these young researchers is Charles Emogor, who has a passion for Pangolins, an endangered, scaly mammal.