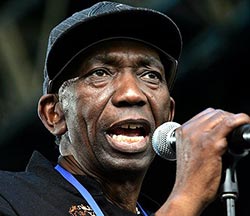 LEGENDARY chimurenga singer Thomas Mapfumo will neither be visiting nor performing in Zimbabwe soon, his publicist Blessing Vava has said.
Vava was responding to a video that was circulating on social media last Friday in which Mapfumo is captured in a plane saying he was coming home after long years in exile.
“Yes, we have checked in at the airport, we are in a plane coming with Gilbert. They have fixed their things so we are now on our way,” Mapfumo says in the video.
However, Vava said the video was recorded in October when the revered musician was on his way to the United Kingdom for a performance.
“I wish to dismiss a video circulating on social media purporting that Thomas Mapfumo will be performing in Harare in December as fake news.
“No such show is planned, the video circulating was recorded last month when Mukanya was travelling to UK,” he said through a Facebook post.
Mapfumo has been a staunch critic of President Robert Mugabe. He has been in exile for decades fearing persecution by the Harare regime.Advertisement