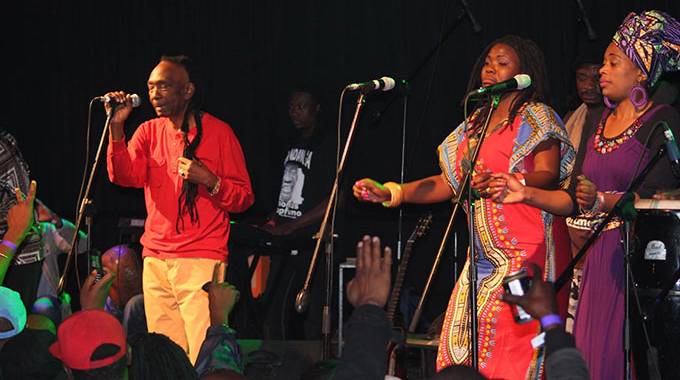 Magumbo (far right) with Mukanya on stage
Spread This News

BLACKS’ UNLIMITED backing vocalist, Eunice “Magumbo” Kapandura, says the extended Covid-19 lockdown has enabled her to put much attention on her traditional herbs.

Magumbo, who now fronts Free Blacks Band but still remains a member of US based Chimurenga founder Thomas “Mukanya” Mapfumo’s outfit, said she is now supplementing her earning from the sales of traditional herbs.

Magumbo’s traditional herbs comprise immune boosters and those that cure chest infections, diarrhoea, STIs and coughs among other illnesses.

She operates from home while the herbs are processed in Domboshava where she spends much of her time on lockdown when she is not in the studio or giving interviews.

“Things are really tough for most of the artistes, especially right now that we are on lockdown but I decided to put my attention on my traditional herbs garden in Domboshava.

“Many people have been making enquiries as they come home to buy the herbs from me.

“If I run out of the herbs, I drive to Domboshava where they are dried and I then sell them to the people who need them,” he said.

Magumbo said it was high time people embrace their traditional medicines in such trying times when the Covid-19 pandemic is claiming lives.

“As Africans, we need to stick to the traditional ways of doing things and herbs are really important at the moment,” she said. 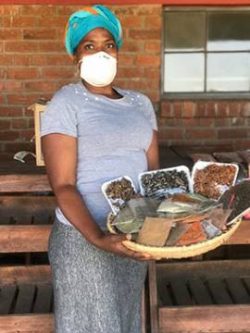 Music wise, Magumbo said her heart bleeds for the majority of local musicians who have lost their sources of income.“We need to keep on working hard and be innovative, especially in these trying times.

“In my case, I’m working on my second album after the success of our debut project titled Mhunzwa.“We are also promoting our single Do What You Gotta di which was co-written by Mukanya.

“By the way, I am still a member of Dr. Mukanya’s Blacks’ Unlimited and I still seek wise counsel from him even though I am in Zimbabwe.

“We are really planning a birthday anniversary for him in July,” she said. Magumbo, who also doubles as a social worker, has been doing a lot of charity work using her influence.

The Bindura bred singer is now based in Dzivaresekwa where she is working closely with other artistes like sungura teacher Shepherd Chinyani and his son Simba.

She is also working closely with Somandla Ndebele who is no doubt one of the successful artistes to emerge from the suburb.