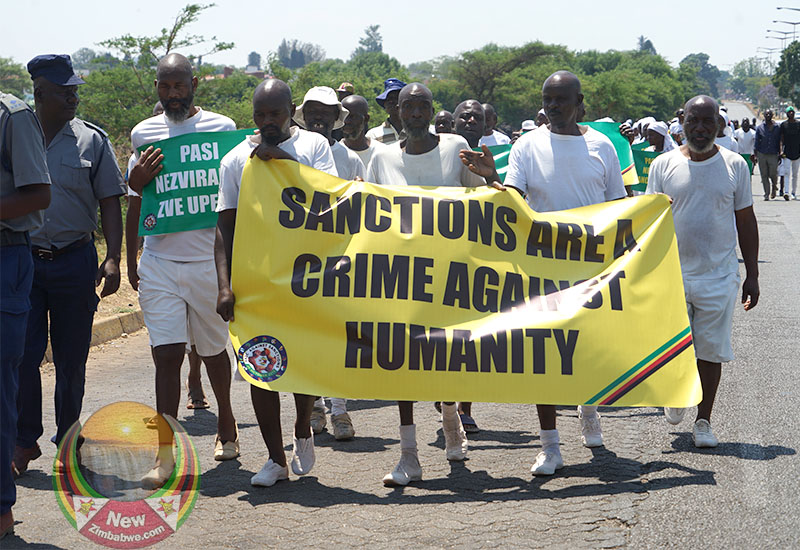 Thousands of Zimbabweans have rallied in support of President Emmerson Mnangagwa’s call on the United States and the European Union to lift sanctions imposed against him and dozens of other officials over alleged human rights abuses and electoral fraud.

Friday’s rally in Harare, was part of a government-organised day of action to denounce Western sanctions, which Mnangagwa says have “crippled” Zimbabwe’s development.

He declared Friday a public holiday, and government supporters from across the country were bussed into the capital early in the morning for a day-long festival, including a march, a football match between Zimbabwe’s most popular clubs and a concert.

Members of Zimbabwe’s opposition dismissed the protests as a propaganda exercise designed to distract from the government’s handling of the crisis-ridden economy.

Clad in white t-shirts, Mnangagwa’s supporters sang songs and chanted “down with sanctions” as they kicked off the “Anti-Sanctions Day” with a rally from the Robert Mugabe square to the national sports stadium, a five-kilometre (three-mile) walk.

The demonstrators, who were given fried chicken, potato chips and carbonated drinks for attending, carried placards describing the Western measures as “evil” and “weapon of mass destruction to mankind”.

In 2001, the US imposed financial and travel sanctions against 85 people including Mnangagwa and other ruling ZANU-PF party members, as well as the late former President Robert Mugabe. The measures were in response to the Mugabe government’s crackdown on political opponents as well as election-related violence. Entities owned by targeted individuals were also sanctioned.

During a long-winded speech, Mnangagwa blamed the sanctions for Zimbabwe’s economic crisis, which is characterised by high inflation and an acute shortage of foreign currency.

“The continued judgement setting of Utopian standards for Zimbabwe are callous, vindictive and should not be allowed to continue. We say enough is enough,” he told a cheering crowd at the stadium.

“We are tired of this life,” said Takudzwa Chipare, a Harare resident. “We are trying to work very hard but things are tough. I think if they remove the sanctions, life can improve.”

Ephraim Chizola, a member of a vendors trade group, said: “Sanctions affect us. Banks can’t mobilise lines of credit. The US sponsor the opposition so that people turn on their government.”

US and EU officials deny such claims. In an op-ed on Thursday in the News Day publication, Washington’s ambassador to Zimbabwe, Brian Nichols, said corruption, misgovernance and lack of reforms were the real causes of the people’s suffering.

“What is holding Zimbabwe back? It’s not sanctions. There are only 141 Zimbabwean people and companies on the United States sanctions’ list. That’s right, just 141, in a country of 16 million. They are on the list for good reason,” he wrote.

“These are people who have engaged in corruption, committed human rights abuses, and undermined Zimbabwe’s democratic process. Blaming sanctions is a convenient scapegoat to distract the public from the real reasons behind Zimbabwe’s economic challenges – corruption, economic mismanagement, and failure to respect human rights and uphold the rule of law.”

He alleged that Mnangagwa’s government has failed to hold corrupt officials accountable and it has overseen a range of rights violations, including the killing of 17 people and the arrest of more than 1,000 others during mass protests earlier this year.

The EU mission for Zimbabwe stressed on Friday that its sanctions apply to specific individuals and not the whole country.

“Our restrictive measures comprise of a travel ban and asset freeze against [the] former presidential couple, a ban for European companies to do business with Zimbabwe Defence Industries, and an arms embargo. That’s all,” it said on Twitter.

For its part, the Movement for Democratic Change (MDC), Zimbabwe’s main opposition party, condemned the government-sponsored festival as “a waste of resources and time”, calling it an attempt “to divert long-suffering masses from the taunting high prices, water shortages and electricity blackouts”.

Nelson Chamisa, the MDC president, said in a Twitter post: “Only true reforms and a return to democracy will fix Zimbabwe’s woes. The rest is mere propaganda.”

Others derided what they called a poor attendance at the event.

David Coltart, an opposition senator, posted a video of row-upon-row of empty chairs at the national stadium on Twitter, saying the turnout was “pitiful”.