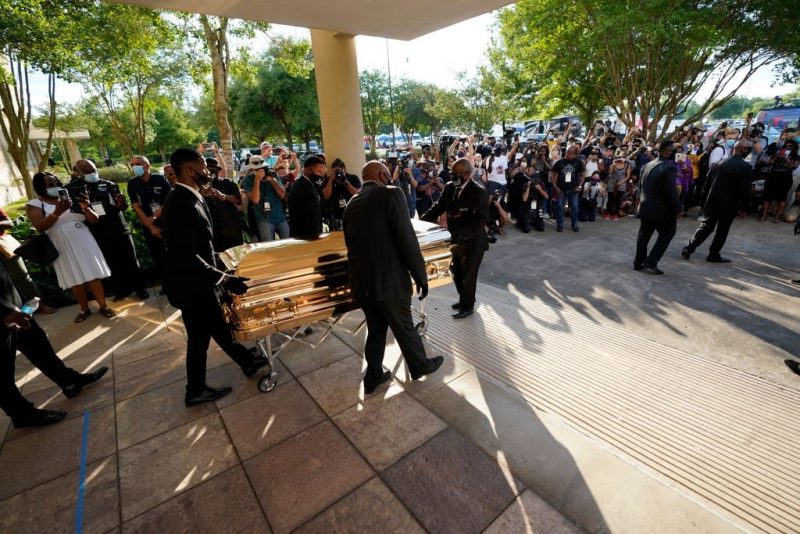 The casket of George Floyd is removed after a public visitation at the Fountain of Praise church in Houston, Texas. Floyd died after being restrained by Minneapolis Police officers on May 25th.
Spread This News

Thousands of mourners filed past George Floyd’s coffin Monday ahead of the African-American’s funeral in his native Houston as a court set bail at $1 million for the white officer charged with his murder in a case that has sparked once-in-a-generation protests against police brutality.

Many well-wishers made the sign of the cross as they approached the open casket to say a last goodbye while others took a knee or bowed their heads in silent prayer for a man who has become emblematic of America’s latest reckoning with racial injustice.

The six-hour viewing at The Fountain of Praise Church – which drew more than 6 000 people, organisers said – was the final stage in a series of ceremonies paying tribute to Floyd before he is laid to rest Tuesday next to his mother in his hometown.

In Washington, Democratic lawmakers knelt in silent tribute to Floyd before unveiling a package of police reforms in response to the killing of unarmed black Americans by law enforcement.

The congressional move came a day after the Minneapolis city council voted to dismantle and rebuild the police department in the city where the 46-year-old Floyd died during a May 25 arrest.

Derek Chauvin, the 44-year-old white officer who was filmed pressing his knee on the handcuffed Floyd’s neck for nearly nine minutes, made his first court appearance on Monday.

The 19-year veteran, who appeared by videolink from prison, faces up to 40 years if convicted on charges of second-degree murder, third-degree murder and manslaughter.

Chauvin did not enter a plea and the Hennepin County District Court judge set his bail at $1 million with conditions, or $1.25 million without.

The conditions would require him to surrender his firearms, not work in law enforcement or security in any capacity, and have no contact with Floyd’s family.

Three other Minneapolis policemen appeared in court last week to face a charge of aiding and abetting Floyd’s murder for their roles in his arrest for allegedly passing a counterfeit $20 bill.

All four officers have been fired.