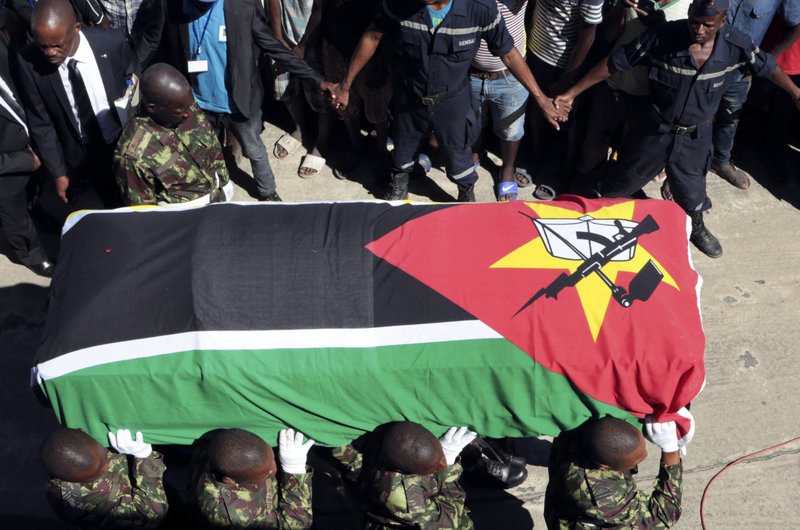 BEIRA: Thousands of people on Wednesday attended the funeral of Mozambican rebel and opposition leader Afonso Dhlakama, with the country’s president and Dhlakama’s successor pledging to forge ahead with peace talks.

Dhlakama died at age 65 last week in his rural hideout in central Mozambique, where he had run a renewed military campaign against the southern African nation’s government after pulling out of a 1992 peace accord that ended 16 years of civil war that killed up to 1 million people.

His death came not long after he had renewed negotiations with the government.

“I want to make it clear that I will carry on with the work that we began, the peace and strengthening of our democracy,” Nyusi said at the funeral in the port city of Beira.

Dhlakama, who turned the Mozambique National Resistance, or Renamo, from a rebel group into a competitive political party after the 1992 peace deal, had demanded the decentralization of power as a condition to lay down arms. His group, which never fully disarmed, was repeatedly defeated in elections and alleged fraud.

Renamo’s interim leader, Ossufo Momade, repeated the demand for more autonomy on Wednesday but committed the movement to negotiations, saying discussions also should focus on integrating Renamo’s fighters into the national army.

Nyusi said he accepted the need to finalize the two demands.

“I confirm my availability for the process,” the president said, adding that the fighters should disarm and join the national army.

In March, Nyusi proposed constitutional changes to redistribute power to the provinces as part of peace efforts.

Renamo’s interim leader also alleged that Dhlakama had died in the bush because of the military’s attempts on his life. The Portuguese news agency Lusa has reported that Dhlakama was ill prior to his death, citing an unnamed Renamo official. Nyusi has said he had hoped to help transfer Dhlakama out of the impoverished country for medical treatment, but it was too late

Dhlakama’s supporters, some wearing T-shirts with his picture, lined up on Wednesday to view the body of a man loved by some and hated by others for his role in the civil war. Dozens of people climbed trees, while others followed the proceedings from the balconies of nearby apartments.

The coffin was draped in the national flag while uniformed soldiers – once the main targets of rebel attacks – stood guard.

Speakers described Dhlakama as a visionary, a democrat and a negotiator.

“He was a man of the people. He died fighting for the freedom of the people,” Sarah Zhuwawo, who said she was a relative, told The Associated Press.

Others were less charitable.

“He was a bandit. He was a dangerous man, that one. He wanted this country to collapse,” said Lucas Chikweya, who was selling boiled eggs on the street.

In the city of Mutare in neighboring Zimbabwe, some criticized Dhlakama for sending his fighters across the border to attack innocent villagers in the 1980s.

Hordes of Mozambicans fled into Zimbabwe and neighboring Malawi as refugees during the fighting.

Between 2013 and 2016, Renamo resumed low-intensity sporadic attacks on Mozambican police, the military and civilians after Dhlakama left his Beira residence for rural Gorongosa, citing renewed attacks on him by the government.

However, tensions eased in 2017 as Dhlakama met Nyusi in Gorongosa to discuss differences between the two sides.

“What matters most is that he was working toward peace at the end. It is important that negotiations are completed before next year’s elections,” said Zimbabwean opposition politician Chris Sibindi, who attended the funeral. Mozambique is set to hold presidential, legislative and provincial elections in October 2019.

Dhlakama will be buried Thursday in his home village.