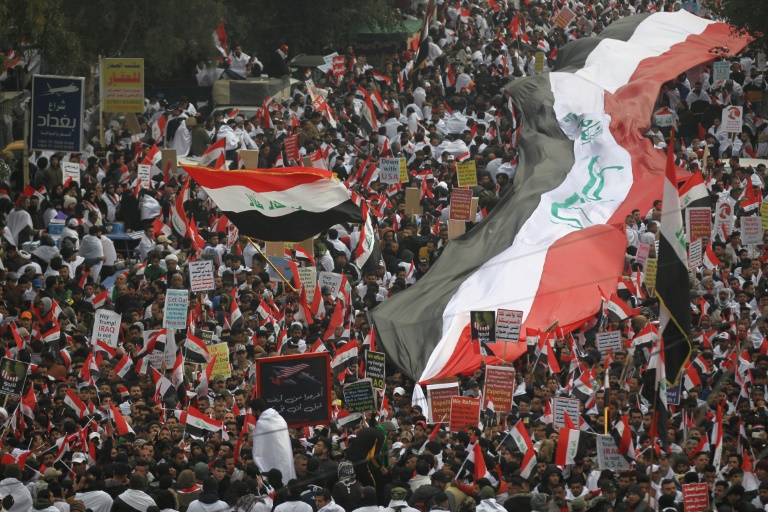 Thousands of Iraqi men, women and children of all ages massed in Baghdad to demand US troops leave the country
Spread This News

Thousands of supporters of populist Iraqi cleric Moqtada Sadr gathered in Baghdad on Friday for a rally to demand the ouster of US troops, putting the protest-hit capital on edge.

The march rattled the separate, months-old protest movement that has gripped the capital and Shiite-majority south since October, demanding a government overhaul, early elections and more accountability.

Thousands of men, women and children massed under grey skies in the Jadiriyah district of east Baghdad, chanting “Get out, get out, occupier!”

Some waved signs in Arabic and English reading “Death to America” and one protester carried a cardboard cut-out of US President Donald Trump on the gallows.

A representative of Sadr took to the stage at the protest site and read out a statement by the influential Shiite cleric and populist politician.

It called for all foreign forces to leave Iraq, the cancellation of Iraq’s security agreements with the United States, the closure of Iraqi airspace to US military and surveillance aircraft and for Trump not to be “arrogant” when addressing Iraqi officials.

“If all this is implemented, we will deal with it as a non-occupying country — otherwise it will be considered a country hostile to Iraq,” the statement said.

About two hours into the rally, protesters began peeling away from the square but thousands lingered.