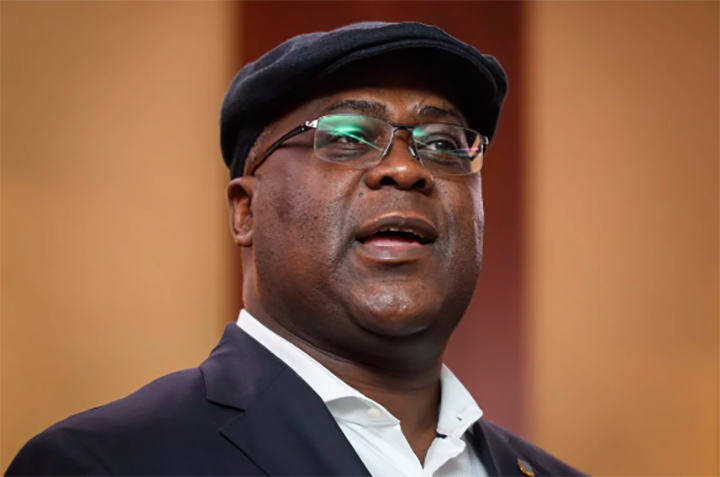 Tens of thousands of supporters turned out to welcome Congolese opposition scion Felix Tshisekedi as he returned to Kinshasa on Tuesday to kick off his campaign to replace President Joseph Kabila in next month’s election.

“We will go with the people and we will win,” declared Tshisekedi, the 55-year-old son of the late Etienne Tshisekedi, who for decades was the face of DRC’s opposition.

He also vowed to deploy observers to combat election fraud, while his running mate Vital Kamerhe, a former parliamentary speaker who returned home with him, said the pair made a “winning ticket”.

As they flew into Kinshasa airport from Addis Ababa, huge crowds of supporters from Tshisekedi’s Union for Democracy and Social Progress (UDPS) and Kamerhe’s Union for the Congolese Nation (UNC) were on hand to greet them.

Police briefly fired tear gas to try and break up the crowds to let their convoy pass, an AFP journalist at the scene said.

Under an agreement unveiled on Friday in Kenya, the pair will run on a joint ticket, which, if successful, will see Tshisekedi becoming president and Kamerhe appointed as his prime minister.

Kamerhe, who ran against Kabila in 2011, will be Tshisekedi’s campaign director ahead of the December 23 vote.

Their decision to run on a joint ticket came just days after the pair had withdrawn their support for an agreement hammered out in Geneva in which seven opposition parties coalesced around a joint candidate in order to boost the opposition’s chance of victory.

“We’re not going to ask the Congolese people to boycott the vote,” Tshisekedi said.

“That would leave the road open” for Kabila’s candidate Shadary, he said.

“We will deploy observers everywhere so there is no cheating.”

Tshisekedi’s main areas of support are in the west, around Kinshasa, and in the central Kasai areas, while Kamerhe has called for backing from the conflict-hit east, where he comes from.

Speaking to AFP last year, Tshisekedi, who does not enjoy the same degree of popularity as his father, said that if he won the presidency he would set up a “truth and reconciliation commission” to call Kabila to account.

He pledged a return to the rule of law, to fight the “gangrene” of corruption and to bring peace to the strife-torn east of this vast central African country.

Fayulu is backed by opposition heavyweights Jean-Pierre Bemba and Moise Katumbi, both barred from running.

Bemba, a former warlord who was Kabila’s vice president from 2003 to 2006, had his conviction for war crimes overturned at the International Criminal Court after serving two years in prison.

Once touted as a consensus opposition candidate, popular business tycoon Katumbi, who lives in exile in Belgium, has been accused of training mercenaries to topple Kabila and was convicted in absentia for real estate fraud.

Shadary, a hardline former interior minister, is one of 15 Congolese under European Union sanctions, accused of human rights violations between December 2016 and early 2018.

In all, 21 candidates are registered to run in the race to replace 47-year-old Kabila, who has ruled since his father, president Laurent-Desire Kabila, was assassinated in 2001.

Kabila’s second and final elected term in office ended nearly two years ago, but he has remained in office thanks to a caretaker clause in the constitution.

The volatile, poverty-stricken nation has never known a peaceful transition of power since independence from Belgium in 1960.