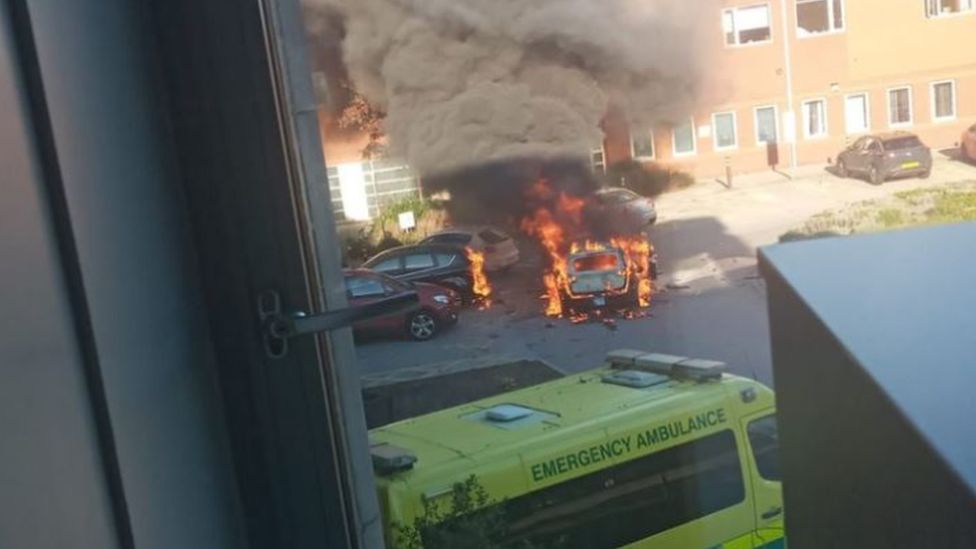 THREE men have been arrested under the Terrorism Act after a man was killed in a car explosion outside Liverpool Women’s Hospital.

A taxi carrying one passenger pulled up just before 11:00 GMT – as a national two minutes’ silence for Remembrance Sunday was due to begin – and exploded.

The passenger was declared dead at the scene and is yet to be formally identified.

The male driver was injured and is in hospital in a stable condition.

Detectives from Counter Terrorism Police North West said three men – aged 29, 26, and 21 – were detained in the Kensington area of the city.

They said they were continuing to keep an open mind about the cause of the blast and were working with Merseyside Police as the investigation continued “at pace”. The security service, MI5, is also assisting.

Armed officers have carried out raids on properties on Rutland Avenue near Sefton Park, and Boaler Street in Kensington.

Specialist officers remain outside a house on Rutland Avenue, in an operation police say is linked to the explosion.

Police negotiators are on the scene, a fire crew is on standby, and a number of residents have been evacuated.

A large cordon, guarded by uniformed officers, is in place.

Carl Bessant, whose partner had just had a baby, was inside the hospital at the time of the blast.

“My partner is really shook up to be honest,” he said.

“We were so close and she was feeding the baby when it happened. We heard a loud bang and looked out of the window.

“We saw the car on fire and someone jump out… screaming, and there was someone inside the car.

“The hospital shut down, no-one in or out, so they said, but people were using the back entrance.”

Prime Minister Boris Johnson said on Twitter. “My thoughts are with all those affected by the awful incident in Liverpool today.

“I want to thank the emergency services for their quick response and professionalism, and the police for their ongoing work on the investigation.”

Home Secretary Priti Patel also tweeted she was “being kept regularly updated on the awful incident”.

The first raid happened at about 13:00 GMT on Rutland Avenue in the Sefton Park area of the city. It’s about 0.75 miles from the hospital. It’s an area of the city with large Victorian houses.

The house that was raided had been split up into flats. Local residents said they had not seen anybody coming or going from the property for some weeks – they thought it was unoccupied. The street remains cordoned off and some residents have been evacuated.

Police were also seen at Boaler Street in the Kensington area of the city. It’s about a mile away from the hospital.

Eyewitnesses on the street said armed police arrived at about 14:00 GMT and raided a house. They said they saw men being arrested and handcuffed. They were led by armed officers into a car. That street also remains cordoned off.

Chief Constable Serena Kennedy, of Merseyside Police, sought to reassure the public, saying events of this nature were very rare and that there would be an increased and visible police presence on the streets in the coming days.A bomb disposal unit and fire engines attended the scene earlier, which remains cordoned off. Road closures are also in place.

Police were called at 10:59 GMT to reports of a car explosion.

“The operational crews extinguished the fire rapidly but… there was one fatality,” he said.

“Another individual had left the vehicle prior to the fire developing to the extent that it did. Our thoughts are with them and the families of those involved.”

Liverpool Women’s Hospital said visiting access had been restricted until further notice and patients had been diverted to other hospitals where possible.

“We are reviewing our patient activity for the next 24-48 hours and patients should wait to be contacted for updates about any planned appointments or other attendance at the hospital,” chief executive Kathryn Thomson said.

Liverpool Women’s Hospital receives about 50,000 patients annually and is the largest hospital in its specialism in Europe.