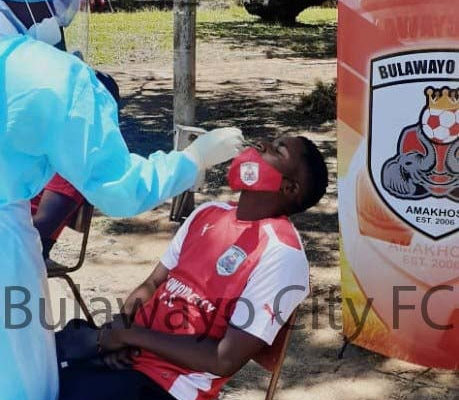 PREMIER Soccer League (PSL) side Bulawayo City has revealed that three of its players have gone into isolation after testing positive for coronavirus following tests done by the club in preparation for the resumption of training.

Following the tests, City confirmed that three players have tested positive and are now self-isolating.

“Bulawayo City Football Club players and staffers undertook PCR testing on Thursday, 15 October 2020. From the exercise we are reliably informed by the City Department of Health Services that three tested positive and have been secured,” Bulawayo Chiefs said in a statement Tuesday.

“In line with public health information data protection and data privacy and having taken into consideration, as we await the receipt of the official test results, we, therefore, are unable to disclose the names of the affected individuals.”

City said the affected players have been encouraged to isolate for an unspecified period, meaning they will not be allowed to take part in preparations for the possible resumption of football activities.

“We have encouraged affected individuals to follow local protocols by self-isolating and working with health officials. As Bulawayo City Football Club, players remain at the centre of what we do and stand for as a club. We shall continue to follow Covid-19 protocols as guided by PSL regulations and emphasise mask-wearing at all times, social distancing, washing of hands with soap of alcohol-based detergents at our premises.”

Bulawayo City decided to have their players tested in anticipation of returning to training after the Sports and Recreation Commission (SRC) last Friday granted football permission to resume training on condition they met Covid-19 health regulations.

Only PSL teams, Women Soccer League teams, as well as national teams, were given the green light to resume activity. A mini-league concept has been proposed using the bubble idea, with activities to be strictly controlled.

Part of the regulations includes having players, technical teams, and support staff being tested for Covid-19 before resuming training.

Bulawayo City have returned to play in the PSL after winning the ZIFA Southern Region Division One Championship last year.

Amakhosi had been relegated from the topflight during the 2018 season before bouncing back at their first attempt.