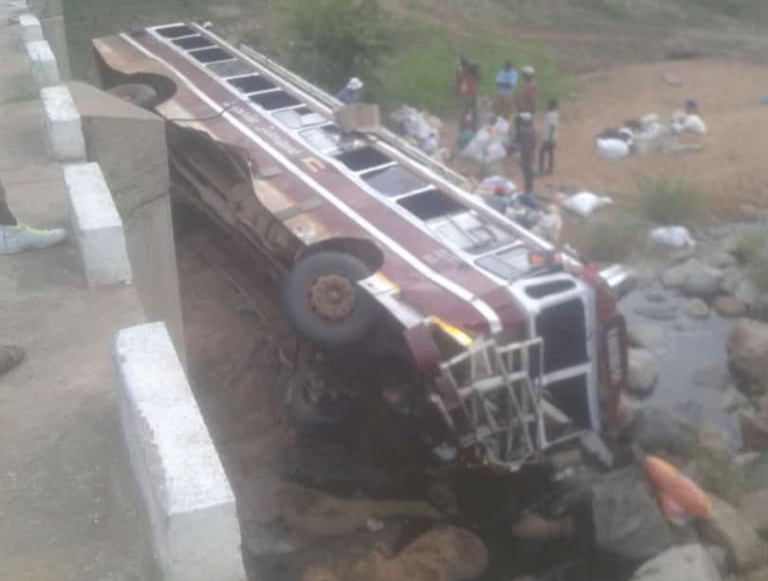 THREE people are feared dead after a CAG bus travelling from Victoria Falls to Bulawayo hit a Lion Encounter truck from the back Tuesday morning.

The truck, which was carrying Lion Encounter employees, was travelling in the same direction with the bus when it was hit from the back as the truck driver attempted to turn right near the Victoria Falls Airport.

Matabeleland North police spokesperson Chief Inspector Siphiwe Makonese confirmed the incident, but said she was yet to get more details.

Some passengers interviewed said an unconfirmed number of Lion Encounter workers who were in the Hyundai pick-up truck were seriously injured and rushed to Victoria Falls Hospital where they were admitted.

Two died on the spot while the third is said to have died in hospital.

“When the truck suddenly turned right, it got hit from the back and overturned, killing people. The bus veered off the road but stopped without anyone getting injured,” said a passenger who was in the bus.

No one was injured in the CAG bus.

Meanwhile, in a separate incident, a bus belonging to Kakono Bus Service fell into Shangani River in Nkayi on Monday after the driver lost control.

This was after the bus hit three cows and it fell into the river after the driver had missed the bridge.

There have always been concerns about the narrow Tshangani River bridge as several buses have in the past also fallen into the river bed.

She said the bus which was heading for Gokwe, from Bulawayo via Nkayi had 65 passengers on board, five of them children.

“Six passengers were seriously injured and taken to Loreto Hospital while two were later transferred to Mpilo Central Hospital in Bulawayo,” she said.

The injured were ferried to Loreto in neighbouring Silobela because Nkayi District Hospital is incapacitated as it has no x-ray equipment.