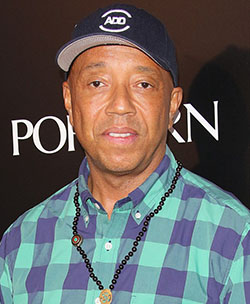 NEW YORK: Three women have told the New York Times that music mogul Russell Simmons raped them, the latest in a cascade of serious allegations of sexual misconduct against powerful men in entertainment, media, politics and elsewhere.
Simmons vehemently denied what he called “these horrific accusations,” saying in a statement emailed to The Associated Press that “all of my relations have been consensual.”
The allegations reported by the Times Wednesday stem from the 1980s and 1990s. One woman, Drew Dixon, said Simmons assaulted her in his downtown apartment in 1995, when she was an executive at Def Jam Recordings, reporting to Simmons. She quit Def Jam soon after, she told the Times, saying, “I was broken.” Through his lawyer, Simmons acknowledged to the newspaper that he engaged in “inappropriate conduct” with Dixon while she worked at Def Jam. But he “emphatically states that he did not have sex with her,” his lawyer said.
Another, Tina Baker, said Simmons raped her in the early ’90s, when he was her manager. “I didn’t sing for almost a year,” Baker was quoted as saying. After the assault, she said, “I went into oblivion.” Through his lawyer, Simmons told the Times he had “no recollection of ever having any sexual relations with Ms. Baker.”
A third, Toni Sallie, a music journalist, dated Simmons briefly in 1987. A year later, in 1988, Simmons invited her to his Manhattan apartment for a party, she told the Times, but when she arrived she was the only one there, and Simmons led her to his bedroom, pushed her on the bed and raped her. “We were fighting. I said no,” she was quoted as saying. The Times said that Simmons, through his lawyer, acknowledged he had dated Sallie but denied nonconsensual sex.
In each case, the paper said, friends and associates of the accusers said they had been told of the incidents at the time.
The paper quoted a fourth woman, Christina Moore, who accused Simmons of groping her during a brief encounter in Miami in 2014.
“The current allegations sent to me by the New York Times range from the patently untrue to the frivolous and hurtful. The presumption of innocent until proven guilty must not be replaced by ‘Guilty by Accusation,’” Simmons said in his statement.
He said he would “relentlessly fight against any untruthful character assassination that paints me as a man of violence.”Advertisement

The allegations weren’t the first to hit the producer and entrepreneur recently. Late last month, HBO said it would edit out any link to Simmons in its “All Def Comedy” show in the wake of an allegation by screenwriter Jenny Lumet, who said Simmons had sex with her more than two decades ago despite her repeated demands that he stop. Simmons said he had a different memory of the night but apologized and said he was stepping away from his companies.
Lumet said she went public after model Keri Claussen Khalighi said Simmons coerced her to perform a sex act and later penetrated her without her consent in his New York apartment in 1991. Simmons said the sex with Klalighi was consensual.
Simmons and Rick Rubin founded Def Jam Recordings was founded in 1984. It made stars of such hip-hop artists as LL Cool J, Slick Rick, The Beastie Boys and Public Enemy, and its roster currently includes Kanye West, Justin Bieber, Frank Ocean, Alessia Cara, Jeremih, Jeezy, Iggy Azalea, Big Sean, Nas and 2 Chainz.