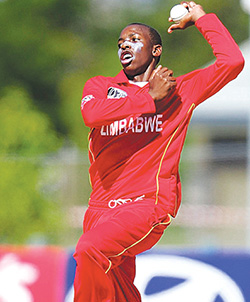 ZIMBABWE have named three new caps, including a third Masakadza brother, in their 17-man test squad to tour Bangladesh later this month.
The selection means that batsman Hamilton, seamer Shingirai and left-arm orthodox spinner Wellington Masakadza could all appear in the same side when Zimbabwe play three tests against their hosts, starting on October 25 in Dhaka.
Should all the siblings take part, it would represent the first time three brothers have played for the same test side since Hanif, Mushtaq and Sadiq Mohammad represented Pakistan against New Zealand in Karachi in 1969.
The 21-year-old Wellington has played just seven first class games but was the pick of the bowlers for Zimbabwe A when they toured Bangladesh last month.
The two other uncapped players in the squad are batsman Brian Chari and allrounder Natsai M’shangwe but there is no place for experienced top-order batsman Mark Vermeulen, dropped after the one-off home defeat to South Africa in August.
Coach Stephen Mangongo also dropped all-rounder Sean Williams.