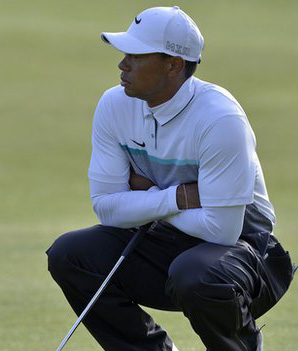 TIGER Woods missed consecutive cuts at major tournaments for the first time in his career.
The 14-times major winner finished the weather-delayed second round at the British Open, missing the cut in two major championships in a with a three-over-par 75 for a seven-over aggregate of 151.
“I only made three birdies in two days,” Woods told reporters. “That’s not very good.
“The golf course wasn’t playing that hard, I just didn’t get much out of any of the two rounds.”
The fate of Woods, one of several players forced to return to complete their rounds, was sealed when he carded three straight bogeys from the 13th.
“Next time it comes around, hopefully I play a little bit better than I did the last two times,” he said.
The 39-year-old American, a triple former winner of the British Open including the 2000 and 2005 editions at St Andrews, also missed the cut at last month’s U.S. Open where he shot an opening round 80 followed by a 76.
Woods, who has plummeted from first to 241st in the world in the last 14 months, never recovered from taking four bogeys in the first seven holes on Thursday.
“On the very first hole I fat a sand wedge in the water,” he said.
“I then fatted my iron off the tee and fatted my eight-iron into the green on two, then drove it into a divot on four.
“It was one thing after another. I had my opportunities, I just didn’t get the ball close enough and then when I did I didn’t make them.”
Woods, tied 147th in a field of 156, praised the 18th hole ovation he received from the crowd that remained through a 10 and a half hour suspension in play caused by high winds.
“The people were fantastic,” he said. “To stay out here all day and to have that kind of a warm reception is awfully special.
“It’s one of the things I was talking about with (playing partner) Jason Day, it’s the greatest walk in golf. He said, ‘Yeah it’s nice when you have an eight-shot lead too’.
“I said, ‘Well, you just go ahead and get that lead’. He’s playing well enough to do it,” Woods said of the Australian who is three behind leader Dustin Johnson of the U.S.
The Open is likely to return to St Andrews in 2020 and Woods quipped: “I’ll probably have less hair then and hopefully a little better game”.Advertisement