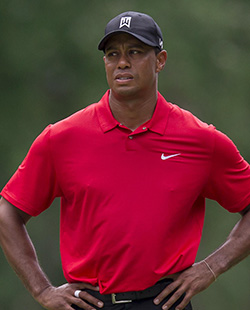 THE biggest worry for Tiger Woods as he returns to competitive golf after a layoff of nearly 16 months is how he will handle the adrenaline rush of facing rivals.
The former world No 1 ends the longest layoff of his career in Thursday’s opening round of the Hero World Challenge in the Bahamas, an 18-man invitational event featuring six of the world’s 10 top players.
Woods, who has slid to 898th in the rankings, has not played since August 2015 after undergoing back surgery that caused him to miss all of last season, had him doubting he might ever return at one stage and still has him worried about his game.
“I would say probably I’m the most concerned about trying to get a feel for the distance,” Woods said. “I haven’t had adrenaline in my system in a while and having that surge of adrenaline through my system, how much further is this ball going to be going?
“I know it generally is a half a club, but is it going to be more than that because I haven’t played or is it going to be less than that or be about that? I’ve always been pretty good at hitting the ball pin high. I’m more concerned about what my body is going to be feeling, the energy, the surge of adrenaline going through my system.”
Woods has tested several clubs during his recovery and likes where he’s at as he starts yet another comeback, having struggled after past recoveries from knee, back and leg injuries.
“Confident. I’ve got all the clubs that I’ve tested and I feel pretty confident with,” Woods said. “I know that after this event I’m going to do more testing and figure a few more things out, but as of right now I’m ready to go.”
His intent remains to win – the same as it always has been during a career that saw him win 14 major titles, four shy of Jack Nicklaus’ all-time record, and 79 PGA crowns, three shy of Sam Snead’s career mark.
“That’s a tall order since I’ve been away from the game for so long and I’ve made a lot of different changes in my game, but the mindset’s still the same,” Woods said. “Physically and also equipment, practice schedules, training, all that has evolved. The mindset of competing hasn’t. That’s to go out there and try to beat these guys.
“When I get out there and I compete and I play, it’s going to be normal. I’m going to get out there and I’m going to try and put the ball in the right spots and make birdies and post a low score and get this title.”Advertisement

TIGER PHASE TWO
Woods backed away from an original plan to return two months ago in the 2016-17 PGA season opener in Napa, California, after a week away from practice at the Ryder Cup left him below his best.
“I was riding my bike at home 30, 50 and 70 miles per week. That’s different than walking a golf course,” Woods said. “I can walk on a treadmill for two, three hours. It’s not the same, putting on spikes and uneven lies. I come in, my ankles are sore, my feet are sore. This is different, and so I had to get used to that.”
One thing Woods achieved during his forced idle period was to unify his business dealings under the TGR brand.
“Basically I’m setting up phase two of my life,” Woods said. “I call it phase two because I can’t play this game forever at a competitive, high level. Setting up my business entities is going to take a load off my shoulders in that regard, so that I’m able to devote more time to my golf while I still can and be at the level.”