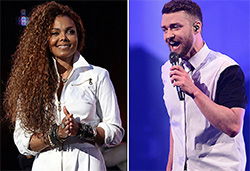 NEW YORK: The booking of Justin Timberlake for the Super Bowl halftime show has triggered a backlash from women, minorities and others who say Janet Jackson was unfairly forced to pay a far higher price than he ever faced for that breast-baring “wardrobe malfunction” at the big game in 2004.
The hashtag #justiceforjanet trended on social media this week after the NFL announced Timberlake would perform Feb. 4 in Minneapolis.
Some argued that Jackson fell victim to a sexist and racist double standard and received harsher treatment over a decade ago than Timberlake did, while he benefited from “white male privilege.”
“His body was not criminalized and demonized in the way that hers was, and that has everything to do with being a white man,” said Janell Hobson, an associate professor of women’s, gender and sexuality studies at the State University of New York at Albany.
Representatives for Timberlake and Jackson did not respond to emails seeking comment.
The NFL said no one has been banned from the halftime show — indirectly referring to Jackson — but didn’t elaborate on the decision to invite Timberlake back or comment on Jackson specifically.
Thirteen years ago, as Timberlake sang the lyrics “Bet I have you naked at the end of this song,” he ripped Jackson’s costume to reveal her right breast, bare except for a nipple ring. Jackson later said her lace undergarment was supposed to remain intact but accidentally pulled away.
She was barred a week later from the Grammy telecast, where she had been scheduled to perform, and her star power diminished, though she eventually rebounded. He 2015 album debuted at No. 1 on the Billboard charts, and she is now on a top-selling tour.
This will be Timberlake’s third time at the halftime show, the most for any performer ever. He first performed there in 2001 with his boy band NSYNC, then went on to appear as Jackson’s guest.
Timberlake has apologized more than once over the years.
When asked about the wardrobe malfunction in an interview this week, Timberlake said, “That won’t happen this time.”

Social media erupted when the Super Bowl announcement was made, especially Black Twitter.
“I feel that considering the damage that that moment did to her career unfairly, I would like to see Justin never return to the Super Bowl,” said Jamilah Lemieux, vice president of news and men’s programming at digital publishing company iOne Digital and black culture website CASSIUS.Advertisement

“It didn’t slow him down. She wasn’t allowed to go the Grammys. How do you have the Grammys without Janet Jackson?” Lemieux asked. “She’s faced more punishment for her breast being revealed than people who have been accused of sexual assault.”
Hobson, author of 2012′s “Body as Evidence: Mediating Race, Globalizing Gender,” said it is interesting that news of Timberlake’s return comes at a time when pop culture is dominated by headlines about misconduct by such figures as Harvey Weinstein, Bill Cosby and Bill O’Reilly.
Hobson said Jackson was the one who was blamed and punished, and the same thing happens to women dealing with sexual assault or rape.
“It’s always women’s bodies that are the problem. So whenever we talk about rape or we talk about sexual assault, it always goes back to, ‘So what was she wearing? Was she walking sexy? Was she being flirtatious?’ As if men have no part to play,” Hobson said.
Others, though, want to see a halftime show starring Timberlake.
Music producer Drumma Boy said Timberlake is a good choice and “has hits to back it up, as far as relevancy right now.”
“I think it would be super cool if he did bring out Janet,” he added. “I think the world would go crazy. If he wanted to completely shut down the world, bringing Janet would be the icing on the cake.”