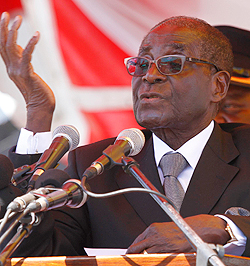 IT is time for the West to take stock, set aside old scores and take a fresh look at Zimbabwe. And as the prime mover in a strategy that has failed to deliver after a decade of trying, Britain should take the lead in an effort to break the deadlock and recover its influence in a country at the strategic heart of southern Africa.
Unpalatable though it is, President Robert Mugabe has emerged from his country’s recent election with more than his domestic power consolidated and the opposition in disarray.
He has been welcomed back into the African fold by the very leaders the west had been hoping would denounce the conduct of July’s election — Jacob Zuma, South Africa’s president, and Olusegun Obasanjo, Nigeria’s former president and head of the African Union group of election observers.
Not only did they endorse the election, albeit with caveats; there was also an implicit message for Britain and the west: “You may loathe Mugabe, but this quarrel has gone on for too long, and your policy of diplomatic rebukes and sanctions has manifestly failed. We urge you at least to make an effort to deal with him . . . or risk jeopardising the relationship between us.”
This was the voice of the “new” Africa, emboldened by its economic growth, angered by what is seen as western moralising, challenging traditional ties with Europe forged during colonial rule and seeking fresh partners — and flexing a diplomatic muscle that had been atrophying for most of the continent’s post-independence era.
Not since 1979, when Nigeria nationalised the assets of BP in protest at London’s handling of rebellious white-ruled Rhodesia, has Africa made its position so clear. The impact of that intervention turned out to be negligible, and in the years that followed a continent debilitated by debt, disease and bad management was preoccupied by its problems.
This time, however, Africa is speaking from a much stronger position.  In recent years it has become more confident as its economic performance improves and its bargaining chips get bigger.
China is now Africa’s leading trading partner and biggest lender; foreign investment is increasing; access to the region’s oil and other minerals overrides western concerns about good governance; and the support of African states in the fight against terrorism is critical.Advertisement

Yet, when it comes to Zimbabwe, the warning that underlies the post-election message from Africa goes unheeded, and the relationship with Harare seems stuck in the past. All the west offers is a reminder of Mr Mugabe’s well-documented abuse of fundamental freedoms, together with accusations of election-rigging.
Meanwhile the imposition of modest travel and banking sanctions on Zimbabwe’s elite has had no effect other than to hamper the opposition — going into an election labelled as the party that supports sanctions is hardly a vote-winner.
Undoubtedly, any move to engage Mugabe will outrage his critics, who rightly remind us of his catastrophic handling of the economy, his violations of human rights and abuse of state funds. But if relations between Britain and the world were solely determined by the probity of leaders and the behaviour of their governments, the number of countries beyond the pale would reach double figures.
For a start, Uganda’s slide into dictatorship as President Yoweri Museveni heads towards his 28th year in office would be grounds for sanction.
Uhuru Kenyatta, the Kenyan president indicted for alleged war crimes by the International Criminal Court, would not have been invited to a London conference on Somalia.
José Eduardo dos Santos, Angola’s president, would be facing tough questions about the billions of dollars of oil earnings unaccounted for.
The forthcoming Commonwealth summit would not be taking place in Sri Lanka; nor would cautious rapprochement with Myanmar be under way.
The basis of a fresh approach is already in place. The International Monetary Fund has been assisting Zimbabwe with its foreign debt, the World Bank offers modest loans. Engagement means ending sanctions and setting out an alternative strategy, offering help to rebuild education and health services, encouraging tourism and investment.
The alternative is to cede ground to China and a host of new investors from Turkey to the Gulf. All are eager to do business in a mineral-rich country well placed to be a regional hub, surrounded as it is by the oil of Angola, the gas fields of Mozambique, the copper and cobalt of southern Congo and the Zambian copper belt, and South Africa itself.
There is no guarantee of a constructive response, no indication of what Zimbabwe’s leader would do in return, no evidence that he would review proposals to “indigenise” local companies. But nor will treating him as a pariah bring about change.
It is time to make up for a lost decade. Britain should consult with Africa, set the diplomatic ball rolling, and send an emissary to Harare to test the water.
After all, Mugabe can only say no.
Michael Holman is the Financial Times’ former African editor. This article was originally published in the Financial Times