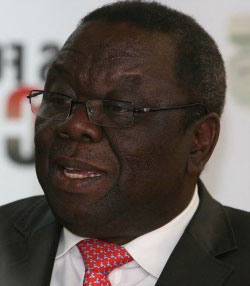 EVER heard of the time when one becomes own competitor? It applies exactly to the situation that the MDC-T finds itself in at the present moment. With signs of an economy in a tailspin written all over country, the ruling party continuously at war with itself, its flag-bearer with one foot in the grave, and the other parties in varying states of advanced confusion and witch hunting, it’s the golden opportunity for the MDC-T to snatch power and end the perennial misery of the Zimbabweans.
That the MDC-T is the only deal in town in Zimbabwe country is just quite obvious. The overall endorsement of Tsvangirai by virtually all the opposition political forces is not just a coincidence either. The flurry of endorsements should however, be taken with a pinch of salt by the movement.
Firstly, all the other opposition parties have realised that they hardly stand any chance of getting a constituency, come the 2018 elections. And, in order to cover up for their shortcomings, they have devised the plan of piggybacking on the MDC-T’s popular support. Yet in retrospect, Themba Mliswa piggybacked on the MDC-T’s popularity in Norton only to abandon it soon after winning. Hey!!!!
The coalition of opposition forces against Zanu, come 2018, is the buzzword in Zimbabwe today! The problem with the proponents of the coalition is that they are not giving room for anything else. Yet the devil lies in the detail. Firstly, at what premium do all the parties with unknown support want join the coalition? I guess that some of them are eyeing nothing less than the vice-presidency based on their former seniority in Zanu and the MDC-T. This is an eventuality that the likes of Tsvangirai may not be foreseeing.
With donor monies drying up fast, the incoming administration will not have the luxury of having a bloated executive like what Zanu is currently doing unless if they want to be in it for themselves. This is likely going to be a bone of contention before consummating the merger of the parties and after elections-handling the egos of faded politicians.
In order for the MDC-T to avert this potential disaster, two options are available. The first is to avoid the coalition option at all costs and go it alone come 2018. This will serve the party from the twin evils of risking infiltration by untrustworthy characters like Mujuru and Mutasa, and maintain internal cohesion as a number of MDC-T members are also eyeing executive and elected positions in 2018, and rightly so. The second option is to engage with the MDC-T executive on what it is that they will offer the coalition partners in the event of a poll victory. The prospective partners will have to either take that, or get lost.Advertisement