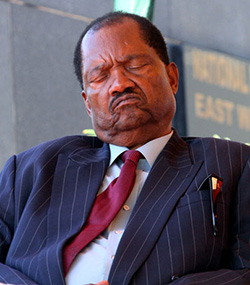 Our Youth should stand up and be counted as their chance has come to replace the clueless and tired leadership in Zimbabwe. It is the prerogative of the government to start crafting policies which are in tandem with the development goals of the African Youth today. The government must start channelling funds to the youth so that they can start engaging in entrepreneurial activities in order to achieve a sound and vibrant economic society and ensure Zimbabwe becomes of the strongest economies in the Southern Africa.
Our current leaders have dismally failed to address the challenges facing our youth today and they must concede the blame. I am of the opinion that they must just swallow their pride and pass the baton to the young who still have the stamina and zeal to bring back the lost pride in Zimbabwe. This country is still rich in minerals and the agrarian sector has, of late, proved to be the source of our marginal economic recovery but these resources have not been fully utilised to the benefit of every Zimbabwean. What we hear is looting and plundering of such resources to such an extent that we have become a country of begging instead of giving.
The struggle should not be left to our current leaders who have failed and are tired. There is a missing link in this economic resuscitation which is the youth who have been marginalised for quite long time. I believe the youth have fresh ideas to share with this current leadership but their opportunities to share their thoughts and brilliant ideas have been thwarted by greedy and selfish politicians who only think of amassing wealth for their own benefit rather than the majority. I do not ascribe to the view that the youth are still too young to lead this country. I would dismiss that myopic thinking as the youth are ready to work for this
country and take leading positions.
Yes, Zimbabwe has been born out of suffering and we salute those who went to fight the liberation struggle as they brought the new Zimbabwe but now that there is this new economic war which needs younger and more energetic soldiers – the freedom fighters of 40 years ago cannot fight this struggle alone and we need to address this imbalance. The current leadership is however reluctant to relinquish power, thinking that the young are not up to the challenge. But the youth can take up the economic challenges bedevilling the Zimbabwe and improve the fortunes of the country only if the current leadership works with them.Advertisement

I would like to challenge the youth to stand up and take this opportunity to show that they can lead. Zimbabwe now needs a vibrant and focused youth which can pick up the flickering torch which was left behind by revolutionaries such as Kenneth Kaunda, Julius Nyerere,
Kwameh Nkurumah , Nelson Mandela just to mention a few. Their vision should be rekindled in our youth today; they should carry on the torch and advance the march towards a prosperous Africa. There is no room for our youth to think inside the box and fold their arms and wait until the situation deteriorates. The youth should come out of the shell and start a new political dispensation.
Let the shape the way they want this country to be developed. Give them a chance to
embrace what their leaders did. Our sons and daughters fought the colonial system and removed the shackles of the chains by their ever indomitable fighting spirit. We really salute them for a job well done. But now it is the time for today’s youth to be on the forefront and fight the evils rampant corruption and poor governance. We need a youth with an undying spirit and a genuine vision and desire to move Zimbabwe to greater heights by empowering them economically and politically.
Our youth must be given the chance to exhibit their leadership skills. We see more university graduates being churned out of these institutions but at the end of the day they end up selling airtime and vending on the streets. It is so disturbing to see such a bad scenario in the country and it would be my pleasure to see the current leadership addressing such challenges like unemployment, corruption which have taken a centre
stage. Current government programmes such as ZimAsset must be put to the test otherwise we might spend time and energy crafting policies on paper and failing to implement them on the ground. We had such good economic policies such as ESAP, ZIMPREST, etc but they failed to take off.
Our youth cannot live in isolation in this global world and cannot afford to be left out in businesses across the world. They need to engage with other people outside the country’s borders and, at the same time, trying to normalise relations with other countries in order to move forward. Our country has been tainted and we need to go back to the drawing board and make Zimbabwe re-emerge with a clean sheet again. The youth need to put the record straight and shape this country into a formidable and powerful economy.
I am hereby challenging the Zimbabwean youth dotted around the country and beyond borders to take up this challenge and create a brand for Zimbabwe where every facet of economic sector is seen producing to capacity. We cannot afford to be a consumerist society whereby we buy, sell and consume but do not produce. We can turn this sad economic morass into a mega billion economic boom, but only if we are sincere in our political dealings. The future is in the hands of the youth and cheap talk will not take us anywhere action is needed.
Leonard Koni is the ADP national spokesperson.