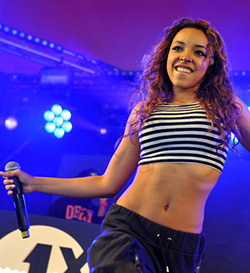 US-BASED R&B star Tinashe has been busy lately coming off a tour with Nicky Minaj before going on the road again in Brazil with Katy Perry, the first time she has been to South America, she revealed.
She also revealed that she’s collaborated with Chris Brown for a song called “Player.”
“I’ve always kinda wanted to do a song with [Chris],” she told Beats 1.
“Obviously, he’s one of the best entertainers of our generation…It’s just exciting to be able to work with him.”
After winning global acclaim with her debut album, 2014’s Aquaris which featured the hit ‘2 On’, Tinashe is now working on her highly anticipated sophomore album ‘Joyride’ and it can’t come soon enough.
Joyride is due out in November.
Tinashe – All Hands on Deck