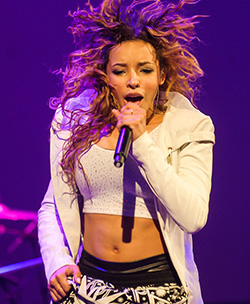 FANS of R&B singer Tinashe have been waiting what must seem like forever for her sophomore album, “Joyride”, which was first announced 18 months ago.
Though she has released hit singles like “Flame”, her follow-up to her 2014 debut, “Aquarius”, still hasn’t been released by her label, with little sign that’s going to change.
In a new interview with the Guardian, Tinashe discusses her apparently stalled career, and puts her finger on what she thinks is to blame: colourism.
Tinashe, whose father immigrated from Zimbabwe and whose mother is Danish, says that her mixed background may be preventing the black community from fully accepting her.
“There’s colourism involved in the black community, which is very apparent,” Tinashe told the Guardian. “It’s about trying to find a balance where I’m a mixed woman, and sometimes I feel like I don’t fully fit into the black community; they don’t fully accept me, even though I see myself as a black woman. That disconnect is confusing sometimes. I am what I am.”
Of course, Tinashe also points to other barriers in her career.
“There’s a lot of sexism in the music business,” Tinashe says. “A lot of sexism. As far as female producers or female engineers … when you’re in these studios, it’s all men. It is so rare that they’d not even expect me to have an opinion.”
There’s also the problem of tribal fandom, which, she says, particularly affects female artists.

“Recently, my cousin was with a friend of a friend who was in high school, and she was like, ‘I’m a fan of Kehlani,’ but in a way that was like, ‘So I can’t be a fan of Tinashe, too.’ Then my friend posed the question, ‘Why not be a fan of both?’ It’s kind of like sport; people feel like they have to pick a side,” Tinashe explains.
This isn’t a problem for male artists, Tinashe says. “There are hundreds of [male] rappers that all look the same, that sound the same, but if you’re a black woman, you’re either Beyoncé or Rihanna. It’s very, very strange.”
In the interview, Tinashe also confirms long-running rumours that Rihanna had at one point taken the song, “Joyride” — meant to be the title track of her upcoming album — for herself. “But I don’t know if it was personally Rihanna, like, ‘I’m taking that from Tinashe.’ I don’t think that’s how it worked,” she says, “but it’s back now.”Advertisement

Still, for all the hardships she’s faced, Tinashe is determined to make things work.
“It’s definitely been discouraging, and I have days where I’m less confident, but at the end I know that I’m going to get to where I need to go,” Tinashe says. “There’s doubt that seeps in, there’s self-deprecation because you look to someone to blame and you can’t blame anyone but yourself, but I’ve never, ever thought, I’m going to work in a mall.”