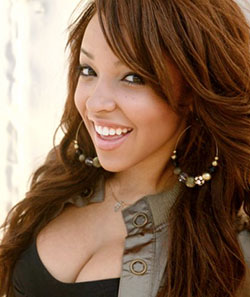 Name game: Memorizing all the words to Tinashe’s late song-of-summer entry, 2 On, is easy. But saying her name correctly? That’s another feat entirely for many of her fans. “I’ve gotten a lot of ‘Tina-shee,’ ‘Tina-shay’ and ‘Tanisha,’ ” she says of the name (pronounced “Tee-NAH-shay”), which is common where her father is from in Zimbabwe. “The worst I ever got was someone calling me ‘Tarnish.’ I was like, ‘What? How’d they even come up with that?’”
Triple-threat talent: Tinashe Kachingwe got her start modeling and acting as a toddler, working as a motion-capture model for Tom Hanks’ The Polar Express in fourth grade and playing a recurring role on CBS’ Two and a Half Men as a teen. After forming The Stunners in 2007 and opening for Justin Bieber on his My World tour in 2010, the girl group disbanded. Tinashe branched out as a solo artist, charting her first hit with 2 On, which topped USA TODAY’s rhythmic airplay charts for four weeks.