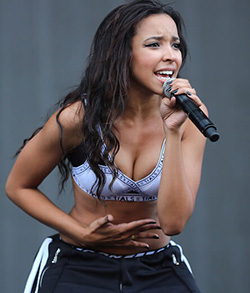 THERE’S nothing like a live gig to complete your fandom journey with your favorite artists. But what about the artists? Where do their journeys begin and end?
“My dad is from a musical culture in Zimbabwe,” says R&B star Tinashe. “They’d sing a lot of songs in harmony as a family, so that was a big part of what we would do when I was a kid. Music was something I was encouraged to celebrate.”
This year, Ford and Billboard collaborate on Ford Front Row, a four-part concert series bringing fans closer to the music, starting July 27, taking place in Los Angeles, Miami, Atlanta and New York.
Tinashe is kicking off the proceedings. Beyond the shows, we seek to bring you nearer to the artists you love via intimate conversations to show their personal journey, from their youth to the present day.
Born in Kentucky and based in LA, 24-year-old Tinashe has established herself as an actress, dancer and singer-songwriter. She’s self-produced mixtapes and written her debut album Acquarius (2014).
It’s been a long road, but her passion is unrelenting. Her parents would play music around the house when she was a kid. Those are her earliest memories of falling in love with pop.

She talks up some of the albums that changed her life, mentioning first Michael Jackson’s HIStory. “I listened to that all the time over and over again.”
Eventually, she’d begin to follow her own nose elsewhere. She recalls being at a friend’s house and noticing a beguiling album sleeve. “It was Janet Jackson’s Velvet Rope album. I listened to that all summer long.”
During her pre-adolescence, she studied her future craft via obsessions with bubblegum era Britney Spears and Christina Aguilera. She’d go on to work with the former on Spears’ own ‘Slumber Party’ single last year, something Tinashe is still pinching herself about. “I was obsessed,” she says. “The whole ‘Baby One More Time’ era…All those music videos, the dances. I’d learn them all.”
At the age of 14, Tinashe went to her first concert: Christina Aguilera, on her Back To Basics Tour.Advertisement

“It was sick. I remember just thinking, ‘I can’t wait till this is my show and I’m on the stage with all this production.’”
She pocketed some of the confetti and took it home. “I was so emotional!” she laughs. The live experience for Tinashe was a moment of completion for her own fandom.
“It’s four dimensional,” she reasons. “You feel the music, you’re there with other people. It’s a huge part of connecting with that artist on a different level.”
Renowned today as a forward-pushing R&B star, Tinashe’s tastes evolved beyond pop during her teenage years to favor more futuristic urban sounds. Radio-stalking rappers such as Ja Rule and Nelly lured her into hip-hop.
“It’s probably the genre I listen to the most now,” she says, citing the breakthrough star Khalid’s new album American Teen as a recent favorite.The current spectrum of musical peers out there inspires Tinashe to keep pushing herself, but most important remain her classic idols: Janet Jackson, Sade, Michael. That’s who she’s looking to while finishing up touches on her forthcoming second album, Joyride.
As she builds a body of work to spark a new generation of music-makers, nothing could be more full-circle than leaning on the artists who initially inspired her to pick a pen.