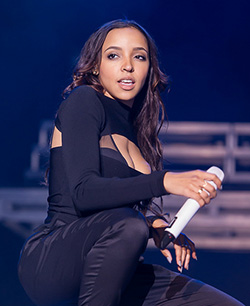 A MIDNIGHT music drop is a move reserved for pop music’s elite, and on Thursday, with the sudden release of her darkly dreamy new Nightride, Tinashe may have earned her place among those ranks.
By the time the singer was 17 years old, she had already spent a lifetime on the cusp of stardom. In her early teens, she was a successful actor, following a Drake-like path that included made-for-TV films like Cora Unashamed, voiceover work on shows like Rocket Power and films such as Polar Express, and a recurring role on Two and a Half Men. But as she began to see her musical dreams come to life, she set her acting ambitions aside.
“I love every aspect of entertaining,” she tells Rolling Stone. “I realized that I didn’t want to split my time up between trying to shoot things and auditions. I decided to take an indefinite hiatus [from acting].”
When she decided to transition to music, her first gig was in a short-lived girl group called the Stunners, a bubbly quintet founded by early-2000s hitmaker Vitamin C.
The Stunners ended up connecting with Justin Bieber and opening for him on his 2010 My World Tour, not long after she made a brief appearance alongside a just-breaking Drake in Bieber’s massive “Baby” video. “My first tour was an arena tour,” she recalls, “which is insane.”
But the life of a teen-pop starlet didn’t do much for Tinashe either.
“We were a group that was put together, and ultimately, I feel like that can be the problem,” she says of the Stunners’ demise.
“We all had really different agendas. I wanted to tell my own story.” So she learned songwriting and production, sometimes building tracks from beats that friends sent to her via Twitter DM, mixing dance music and moody, sensual R&B.
“I didn’t have a record label, so I was just completely free,” she says of what led to her independently released solo debut In Case We Die, which garnered heavy comparisons to the ominous sexuality of the Weeknd. “I didn’t have the media projecting opinions on me. I had absolutely no boundaries.”
Following the mixtape was Tinashe’s 2014 debut album, Aquarius, which remains one of the most exciting R&B records of the past few years, at times suggesting Janet Jackson via Lana Del Rey, and drawing comparisons to Beyoncé. Tinashe’s eclectic background showed through in the album’s intimacy, musical smarts and youthful flirtiness. Advertisement

Now, at 23, she’s releasing an ambitious two-part follow-up: Nightride, out now, and Joyride, out early next year. She recorded some of the music herself, but most of it was made with A-list producers including the-Dream, Tricky Stewart, Dev Hynes and PartyNextDoor, as well as collaborators like rapper Travis Scott.
“I had so much stuff built up,” she says of Nightride/Joyride, the sheer size and scope of which led to some “creative differences” with her record label and a delayed release of the new music, with Joyride originally scheduled as the sole album set for release back in January. “It’s a little convoluted, but I guess I was just attempting to please everyone,” she explains.
Her Joyride tour ended up being cut short, leading to the already-prolific artist creating even more music, including recent singles “Superlove” and “Company,” recorded during her brief time off.
“The majority of the album was already there, so it wasn’t like that much changed,” she explains, while also noting that Nightride/Joyride are related projects.
“I see them as two things that are equally the same. I think you can be a combination of things, and that’s what makes people human and complex. They are equally me. I don’t like to be limited to one particular thing so I want to represent that duality and that sense of boundlessness in my art.”

Tinashe Jorgensen Kachingwe was born in Kentucky, the daughter of two college professors. Her family lived in Chicago before ending up in Los Angeles, where her father, a first-generation immigrant from Zimbabwe, teaches acting at Cal Poly. “Growing up in the theater and seeing him onstage, I really did admire that,” she says. “I always wanted to be up there putting on a show.”
With her experience and success as a performer, Tinashe has been called upon by her dad as a guest in his classes. “He’s asked me to come a lot. I’ve come once before [and] it was really fun,” she says. “My parents are always so proud, so they always tell their students about me and everything.”
As her success has grown, family has also provided a kind of shield from the tabloid-y side of fame. Even as rumors swirl that she’s dating Calvin Harris, the singer still lives at home with her parents and two younger brothers, going to sleep in the room where she makes her records. “It’s that stability factor,” she says. “I’ve made some of my best music in the studio I built in my bedroom.”
Teaching gigs and an on-screen past aside, Tinashe remains focused on her musical fulfillment. “I’ve always had an underdog mentality, and I’ve always felt like I have something to prove,” she explains. “Deeper than that, I’m trying to balance being able to release the type of content that’s fulfilling to me as an artist [while] trying to navigate a changing music industry.”
As for how she’ll accomplish that? It’s all part of the joyride. “I’m just going to do it my way and do it unapologetically.”