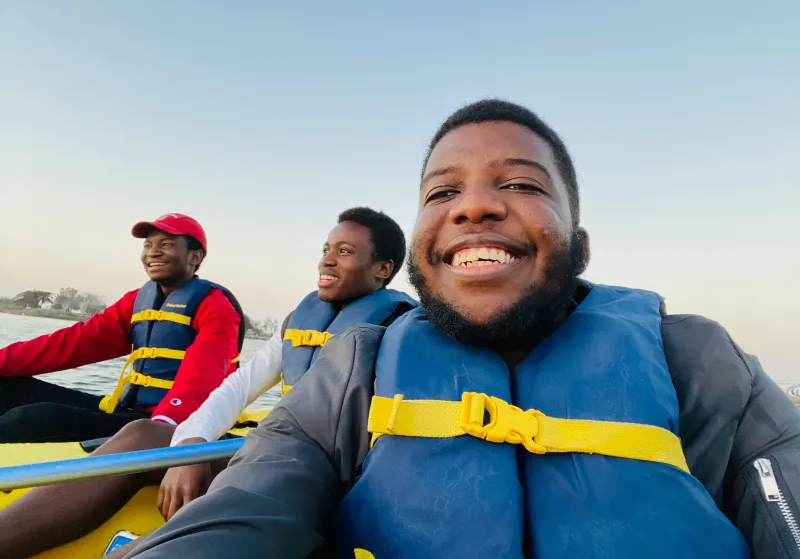 By By Helena Getahun-Hawkins I The Daily Stanford

Tinotenda “Tino” Nyandoro, a junior with a passion for expanding education access, died on Sept. 12 in a car accident in his native Zimbabwe. He was 23 years old.

Friends and faculty remembered Nyandoro as charismatic, jovial and outspoken, the type of person who loved talking to people in whatever environment he was in.

Nyandoro, one of seven children, grew up near Harare, Zimbabwe in the Mashonaland West province, which is located in the northern region of Zimbabwe. He attended high school in the nearby Mudzi District, though his road to graduation was not easy: At one point, he temporarily dropped out due to his family’s financial challenges, which necessitated that he take on a part-time job.

After graduating high school in 2018, he took a gap year to work full-time and pay his siblings’ school fees before getting accepted to Stanford on a full scholarship in 2020.

When Nyandoro arrived at Stanford, he was greeted by a bleak, empty campus — it was the fall of 2020, and most students were at home. That quarter, he took COLLEGE 101: “Why College? Your Education and the Good Life, which he wrote later in a Daily article, was one of his favorite classes.

French professor and COLLEGE Program Director Dan Edelstein, who taught the course, said he worried the bizarre pandemic environment and Nyandoro’s move to the States might prove difficult and isolating, but he soon discovered he had nothing to worry about.

“He was just such a dream student because he just was committed and found that, despite being stuck in his room, he was having the time of his life,” Edelstein said.

Edelstein said Nyandoro thrived in the class, often showing his professor all the books he’d checked out by the authors they were reading in class and asking to discuss them together. “He would bring that excitement, that spark, this sort of freshness to the questions and the topics we were studying, and everybody could feel it,” Edelstein remembered. 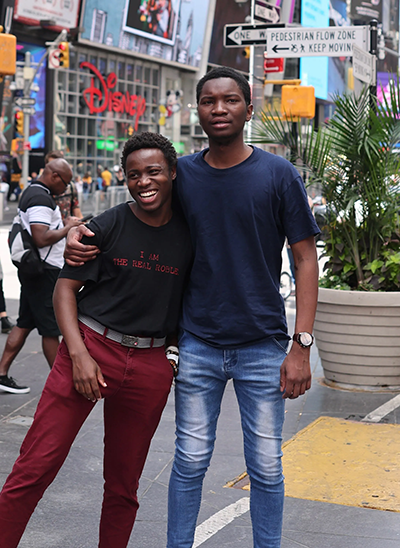 Mpala and Nyandoro on a visit to New York this summer. The pair, who were the only international students from Zimbabwe in the class of 2024, first met at their visa interview in Harare. As time went on, Mpala and Nyandoro felt more like brothers than friends. (Photo courtesy of Proud Mpala)

Edelstein said what inspired him most about Nyandoro was how deeply he took what he was learning in class to heart. Like most students, Edelstein said, Nyandoro came into college unsure of what he wanted to do, but he hoped to be successful enough to be financially comfortable.

As the class progressed, Edelstein said Nyandoro realized how much he wanted to learn and grow through his college experience so he could give back to his community and lead a life of purpose.

“He’s my inspiration that [educating] is always worth doing and trying, even if it gets difficult at times,” Edelstein said, adding that he often thinks of Nyandoro as he teaches the same class this year.

Friends agreed that Nyandoro saw his Stanford education as a way to give back to those who didn’t have the same opportunities that he had. His friends have since put together a GoFundMe to support the education initiatives he pioneered during his life.

“He was always thinking about how can I give back, how can I create opportunities for the underserved, for their needs,” said Takudwza Caitano ’23, whose friendship with Nyandoro started online when he was first accepted to Stanford in 2020 and strengthened last year when both students were on campus.

Throughout his time at Stanford, Nyandoro was the breadwinner for his family, financially supporting the education of his siblings alongside around twenty other students in his community, his friends said. 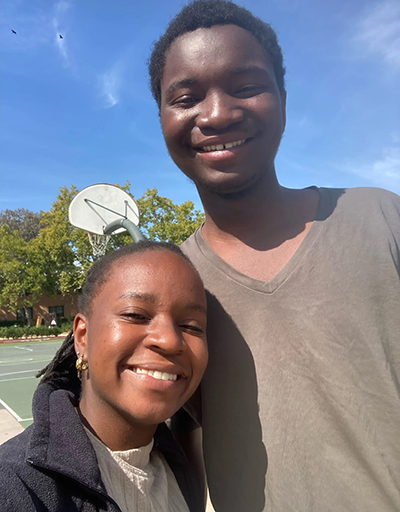 Whenever he could, noted his close friend Proud Mpala ’24, Nyandoro would go back to Zimbabwe, returning every break and even spending his freshman spring quarter in the country. Mpala recalled Nyandoro calling him from the most remote parts of Zimbabwe where he would go talk to teachers and offer the resources that he could.

His selflessness and passion for education culminated in his most recent project, Project Regenerate. With funding from the Donald A. Strauss fellowship, which selects students from universities in California to lead a high-impact public service project during their junior or senior year, Nyandoro founded an organization that sought to design a curriculum to help students in the Mudzi District with college applications. The district is where he attended high school, and 70% of students there do not attend a post-secondary institution. Nyandoro planned to train 30 high school teachers through the project so they could help over 300 students complete college applications.

In addition to his entrepreneurship, Nyandoro worked at Stanford’s Tech Desk, spent time at the Center for African Studies, studied abroad in Cape Town, worked a Cardinal Quarter and volunteered with churches on campus.

But friends said he always found time for fun, whether frequenting his favorite bar in Palo Alto, The Patio, or discussing politics and philosophy with patrons at his preferred restaurants.

Before his passing, Mpala recalled taking a trip to Boston with Nyandoro. The two found themselves at a social gathering where, at one point, Nyandoro had managed to pull everyone at the party and got them to listen to the stories he was sharing. Mpala was always struck by Nyandoro’s ability to influence and engage people.

Dumisile Mphamba ’21, Nyandoro’s friend and freshman year resident assistant, said, “He was also what I like to describe as a hustler.”

Caitano agreed, adding, “Tino always managed to navigate through situations where there was no way out. He’d always find a way out, which was kind of comical, but it was also kind of inspiring.”

Caitano fondly remembered a time when, on his birthday, a tipsy Nyandoro was banned from a club for thanking his friends for the great night he had had a little too loudly in his native Shona — the bouncer thought he was yelling at and offending the police officer in front of him. The next day, his friends wanted to return to the club, but they reminded Nyandoro he could not come because he was banned. Fifteen minutes later, Nyandoro told them they would all be going to the club because he had called the owner and had sorted the situation out. When they arrived at the club, the owner was there and got them free drinks throughout the night.

Caitano said he could never remember Nyandoro being angry or sad. Instead, he was always smiling, laughing and dancing.

Mphamba said, “A big part of his [Nyandoro’s] impact was showing people how much there is to enjoy in life, even despite whatever challenges you may be facing.”

Nyandoro also inspired Mphamba, and others surrounding him, to give back to their home communities and to always make time for what was most important in their lives. Mpala continues to be amazed by Nyandoro’s proactiveness: “He was a practical person, if he said, ‘I’m doing this,’ literally the next day he was doing it,” Mpala said.

Edelstein said he has been able to find comfort in the life Nyandoro did lead before his passing: “The only, incredibly meager, consolation that I’ve been able to find in this unbelievably sad story is that he was so happy, he wasn’t postponing his life, he was living the life that he wanted to be living.”