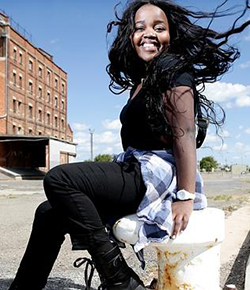 RHYME Slinger Tkay Maidza, described as one of Australia’s rising superstars, released “an awesomely schizophrenic” mixtape called “Switch Tape,” which jumps around between rap, pop, electronic, and ’90s house.
The much-anticipated album from the 18 year-old Adelaide-born rapper moves through varying styles that basically all paint a different picture of dancefloor-based kinetic energy.
It’s filled with grinding synth, variegated rhythms of the rapper’s rapid-fire flow, a Mortal Kombat sample, and plenty of Earth-bothering beats – hyperactive atoms bumping together for 35 minutes.
There are some nice synthpop feels with Tkay exhibiting as many pop sensibilities as sweaty disco box frenzies, such as the big band dancehall that rumbles beneath the hook of “stomp your feet like a brontosaurus”.
Featuring a bunch of tracks including remixes and edits all mixed together nicely, it’s a bubbling, nocturnally euphoric showcase of an artist who, from the sounds of things, is going be everywhere pretty soon.
The Australia-by-way-of-Zimbabwe MC has been blowing hot since the August release of the acclaimed “Uh Huh”, itself a follow-up to last year’s “Brontosaurus” and the dubstep-infused “Handle My Ego”.
Tkay Maidza – U-Huh