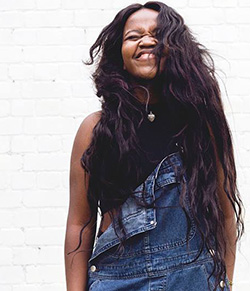 TKAY Maidza is on a New York City charm offensive.
“Y’all niggas are mad cos you can’t handle my ego,” raps the diminutive 18-year-old, shaking her waist-length hair as she shimmies across the stage at Pianos bar on Ludlow Street.
At this Southern Exposure event, at a hip-hop showcase at SOB’s in SoHo, at the Delancey’s Aussie BBQ, the crowds of the annual CMJ music marathon (New York’s answer to SXSW) seem smitten.
Even cynical New Yorkers are comparing Maidza (favourably) to MIA and Azealia Banks. During her catchiest hit, U-Huh, she joins her audience on the floor.
“Hold up, hold up, hold up, wait!” she riffs on Imprint. “We in the jungle and I’m here to make an imprint.”
Off-stage, after six downtown Manhattan gigs, Maidza doesn’t switch off. Over a coffee at a cafe close to the Madison Avenue record label she’s been meeting, the Adelaide-based artist sums up her attitude.
“I think Aussies are so chilled out and heaps sarcastic. So that’s basically what I am. It’s all for fun and being silly, at the same time as being yourself. That’s being Australian.”
This combination scores on tracks like her 2013 debut, Brontosaurus (“stomp your feet like a Brontosaurus”) and Switch Lanes, with its cool anime video in which she rides a dolphin.
“I don’t know why they think we’re the same,” she sings on the latter — a highlight of her EP, Switch Tape — as she mourns out-maturing old friends.
Tkay Maidza – Switch Lanes