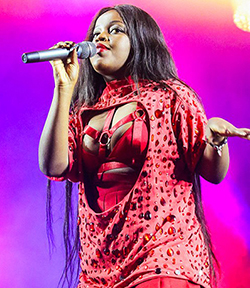 AN unreleased Tkay Maidza song has featured on HBO’s Girls after the show’s creator Lena Dunham personally asked for a song from Maidza’s label.
The song, titled Glorious, was featured during a party scene on the show and was a finished product but not featured on Maidza’s debut record, TKAY.
“Girls reached out to my US label asking if we had any unreleased songs for their final ever season as Lena knew who I was and is apparently a fan of mine,” said Maidza.
“They wanted something for a party scene and I have maybe 5-10 songs that are basically finished but didn’t make the cut for my album.
“We thought Glorious could fit well, so we sent them that and the feedback was that Lena loved it and they wanted to use it.
“I love the show and it’s really crazy that they know me but I’m excited to see the track in there and for people to hear it.”
Maidza has made a significant mark on the States — she was recently nominated for a BET Award, as well as collaborated with Killer Mike on last year’s song, Carry On. She was recently in Austin, Texas for SXSW.
Advertisement