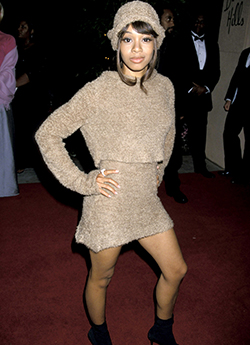 RAMMY winning R&B group TLC is depending on fans to fund the release of their final album through a Kickstarter campaign.
The group, which currently consists of T-Boz and Chilli, launched the campaign on earlier this week.
It’s been nearly 13 years since their last album, “3D,” which was released seven months after the death of Lisa “Left Eye” Lopes in 2002.
“We’ve always been known to do things differently,” said T-Boz, who was born Tionne Watkins.
“We’ve always been trailblazers and trendsetters. We’ve always been outspoken, and this seems like the perfect opportunity.”
TLC released back-to-back hits, including “Creep,” ”Waterfalls” and “No Scrubs.”
Their Grammy-winning sophomore album, “CrazySexyCool,” sold more than 10 million units.
The group once filed for bankruptcy in 1996, despite having two multiplatinum albums.
T-Boz and Rozanda “Chilli” Thomas have already begun the writing phase and production of their fifth album, expecting to release it in May when their tour starts.
The group is hoping to collect at least $150,000 through the campaign to fund the recording process from paying for studio time, production, compensating the musicians and promoting the album.
“People may say, ‘Hey, you are celebrities. Why can’t you just pay for it yourself?'” Chilli said.
“But it doesn’t work that way. There’s a lot that goes into it. We want to bring our fans into the process and see how it’s done.”
TLC’s campaign efforts follow Neil Young, who used Kickstarter to raise $6.2 million through 18,000 supporters last year to fund his digital music project PonoMusic.
With donations starting at $5, supporters will receive an exclusive digital track and communicate with them during their recording process.
Higher pledges will include VIP concert tickets, a recorded custom voicemail by T-Boz and Chilli, an in-person fitness class taught by Chilli and wardrobe pieces worn by TLC during their music videos.
Chilli said using Kickstarter would allow them to have more control over the direction of the album.
“We could knock out two birds with one stone,” Chilli said.
“We can have them involved in our album. Then also, we can have control over everything. That’s a perfect combination.”