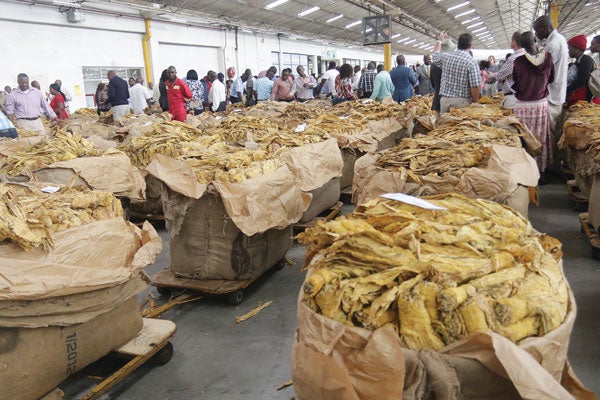 TOBACCO output for the year 2022 is expected to decline by 15%, mainly due to erratic rainfall received during the 2021/22 rainy season amid fears that disturbances in Ukraine will negatively impact the economy, TSL Limited has reported.

“The Tobacco Industry Marketing Board announced 30 March 2022 as the commencement of the tobacco marketing season, a week earlier than in the previous year. Indications are that National tobacco volumes are expected to range between 10% and 15% below prior year

During the review period, group revenues in the first quarter were generated mainly from supply of agro-inputs, provision of logistics services and real estate services primarily to the agriculture industry.

Revenue growth of 72% and 69% was recorded in inflation adjusted and historical terms respectively for the quarter with preservation of shareholder value continuing to be a key priority.

The group started executing strategic initiatives which will be partly funded from borrowings as gearing for the quarter remained low with satisfactory interest cover.

The group’s sub units like Propak Hessian commenced distribution of tobacco packaging materials during the quarter with volumes of hessian wraps being maintained ahead of prior year whilst tobacco paper is 16% above the same period last year.

Agricura’s volumes across all major product lines were depressed against prior year due to the late start of the rainy season which resulted in a shift in volume uptake. However, there was significant volume growth in fertilisers compared to last year due to availability of stocks and favourable pricing.

On the logistics side, the rail initiative from Maputo to Harare positively impacted volumes in the General Cargo and Ports divisions although shortages of empty containers persisted. Distribution volumes are 49% behind last year as most customers’ volumes slowed down.

Performance in the real estate operation remains satisfactory with pace leased out was 10% above prior year due to the contribution of the new warehouse that was under construction in prior year.

“The operating environment is expected to remain complex and the global developments in Eastern Europe will have an impact on supply chains and availability of critical raw materials, exerting real inflationary pressures in the country,” added Pedzisayi.