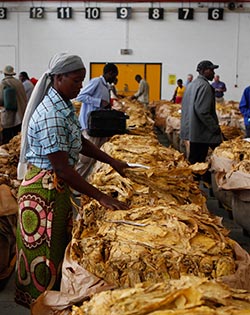 HARARE: Sound value chains in the tobacco industry have spurred lending to the agriculture sector by commercial banks, a banking executive has said.
While Zimbabwe’s agriculture sector – a former mainstay of the economy, has witnessed a spectacular decline in productivity, the tobacco industry has rebounded from its 2008 nadir.
Last year tobacco sales earned the southern African nation a total of $855 million, nearly a third of its total export earnings. This year’s season has just been concluded with production coming in at 201 million kilograms ahead of the target of 160 million kilogrammes.
Agribank business development director Joseph Mverecha on Wednesday told an agribusiness forum that tobacco was taking up more than half of the lending channeled towards agriculture.
“Confidence in the tobacco space has grown because of an efficient value chain and an effective stop order system.This year the banking sector will avail about $1,12 billion to finance agriculture. Of that, 55 percent is going to tobacco, while only about $190 million will go towards maize.,” he said.
Mverecha said while lending to agriculture was increasing, the cost of finance remained high, inhibiting most farmers from accessing loan facilities.
“This economy simply has no money. International credit lines have been few and the cost of funding is very high and this has resulted high loan defaults. A third or so of the bad loans taken up by ZAMCO are from the agriculture sector.”
As at 30 June 2016, banking institutions had disposed of non-performing loans amounting to $528.4 million to ZAMCO- government’s bad debt buying company.
According to a treasury report, Zimbabwe’s agriculture sector requires $2 billion to reach its full potential.Advertisement