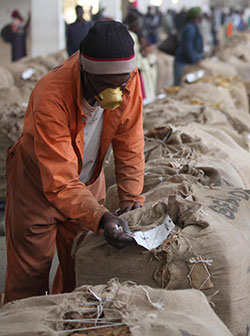 TOBACCO sales reached 190 million kg, which surpassed this year’s target of 180 million kg, the Tobacco Industry and Marketing Board (TIMB) announced Thursday.
Both auction and contract sales fetched a total of US$604.7 million.
Although auction marketing is set to end soon, contract sales however, would continue until further notice, TIMB added.
In 2013, a total of 166 million kgs of tobacco worth US$616 million were sold.
TIMB chief executive officer Andrew Matibiri hoped the remaining crop to be sold under the contract system would push production figures for 2014 to 200 million kg.
If met, the target would be slightly lower than the country’s peak production of 231 million kg in 2001.
Tobacco has been on a rebound since 2008, with more farmers turning to the lucrative crop which ranks among one of the largest foreign currency earners for Zimbabwe.
The cash crop is actually the country’s largest foreign currency earner in the agriculture sector and China has been the largest buyer of Zimbabwean tobacco over the last few years.
Advertisement