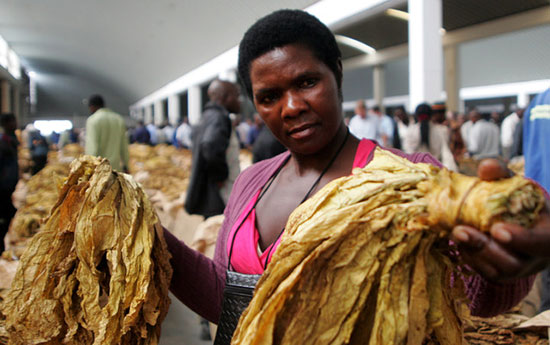 HARARE: Volumes of sold tobacco have surged to 33.3 percent during the first nine days of this year’s tobacco auctioning season in Zimbabwe, despite a ravaging El-Nino phenomenon in the southern Africa region last year which saw many crops fail.
The 2017 tobacco marketing season roared into life on March 15 and the Tobacco Industry and Marketing Board (TIMB) says it is expecting more than 200 million kilogrammes to be sold this year.
Last year, 202 million kilogrammes of golden leaf was sold at the auction floors.
A report released by the Tobacco Industry and Marketing Board (TIMB) on Tuesday showed that since the auction floors opened nine days ago, 10,3 million kilogrammes of the golden leaf, worth US$26m, had gone under the hammer.
Last year, in the comparative period, 7.7 million kilogrammes of the crop, worth US$18.2m, had been sold at the auction floors.
This year, revenue from sales has moved in the positive by 43 percent.
Like last year, there are three licensed auction floors this year, and these are Tobacco Sales Floor (TSF), Boka Tobacco Auction Floors (BTAF) and Premier Tobacco Auction Floors (PTAF).
TSF has seen the largest number of tobacco sold at its floors, with 1.8 million kilogrammes having been auctioned, while 394.020kg have gone under the hammer at BTAF and 272.611kg at PTAF.
The average buying price has also improved by 7.23 percent, from US$2.36 last year to US$2.53 at present.
No auction floor as yet has seen its average price hover above the combined average buying price from all the floors.
TIMB said, apparently, there had been an upward trend in seasonal average prices, from US$2.20 in 2015 to the current US$2.53 this year.
The Tuesday report showed that 139,371 bales had so far been auctioned, while 11,152 had been rejected.
Last year, 95,130 bales were auctioned and 2,981 were rejected after nine days of activity at the floors.
TIMB attributed the higher bales rejection percentage this auction season to poor grading, poor bale presentation on the auction, as well as an increase in rejection of wet bales due to the rains.
Contracted growers have contributed the remaining larger chunk of the crop delivered at the auction floors.Advertisement