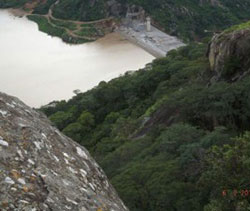 CONSTRUCTION of the $200 million dollar Tokwe-Mukosi Dam has been in the media from the day the contractor stationed his equipment at the site to lay the foundations, nearly fifteen years ago.
The project, which began in June 1998, has dogged the limelight for a variety of reasons, chief among them the refusal by villagers to accept the miniscule monies parcelled out by government as compensation for their relocation.
Over five thousand inhabitants of the surrounding communities were told to vacate the Nuanetsi Range to make way for the dam construction.
With construction work on the giant inland water reservoir just midway through, flooding on the upper basin has left families stranded, forcing the government to appeal for help to relocate the affected the families.
But the benefits to be derived from Tokwe-Mukosi dam are immense, taking into account the estimated revenue and developments that span fisheries, boat cruises, adjacent parks and hydro power generation.
NewZimbabwe.com visited the construction site and spoke to Steven Muza, who is the country representative of Salin Impegilo, the Italian company building the dam.

“A lot of negative things have been said about this dam but let me put in on record that the dam wasn’t collapsing,” he said.
“There was only some slippages of water into the rock fill and also that we did not envisage the flooding which happened this year, the first time in 40 years for the province to get such rainfall.
“But the dam wall is secure and the client will do some adjustments but, as of now, there’s no need for adjustments. Once we complete the dam, everything should be very normal.”
The company envisages completing construction by August this year, assuming everything goes to plan.
“If the rainfall stops we should be on coarse and the water that you see sipping through (the dam wall) is not a danger at all, as this is a rock fill dam – there is no danger at all,” Muza added.
When completed, the dam will be Zimbabwe’s biggest inland dam with a capacity to generate 50 megawatts of electricity, enough to light up the whole of Masvingo province.
Apart from the much-needed electricity, surrounding districts (Masvingo, Chiredzi, Ngundu, Triangle), already boasting a strong agricultural industry based on sugar plantations, could be turned into a vast green belt.Advertisement

With respect to tourism, the area could also become a major resort after Kariba, with a national park planned to add further value.
After construction is completed, a hotel is expected to be built, creating about 700 jobs for the locals. All these developments would help transform the former Fort Victoria into one of Zimbabwe’s sought-after tourism resort towns.
Tokwe-Mukosi will be the biggest inland dam with a 90 metre dam-wall and a back throw of over 35km, making it Zimbabwe’s biggest development of the 21st century.
Already, and in a possible sign of the business potential, the project has attracted commercial sex workers at Ngundu Growth Point from various parts of the country.