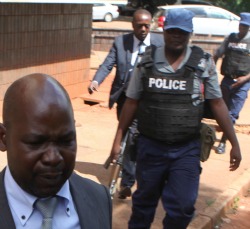 FORMER Prosecutor General (PG) Johannes Tomana who was facing several office abuse charges Monday walked out of court a free man after High Court Judge dismissed all charges levelled against him.
This followed a successful application for removal from remand upon state’s failure to prosecute him within prescribed indictment time.
Tomana has been on remand for 14 months and Justice Amy Tsanga ruled the charges he was facing have lapsed and that the former PG was entitled to “unconditional liberty.”
He was represented by AdvocateThabani Mpofu, instructed by Hubert Mukewa.
Tomana was facing six counts of criminal abuse of duty as a public officer alternatively defeating or obstructing the course of justice.
“Applicant shall be entitled to his unconditional liberty and to the release to him of his bail recognisance that is held by the State,” ruled the Judge.
He was indicted for trial on November 17, 2016 and had been waiting for 14 months without a trial date.
His argued that the law provides that if no trial takes place for a period of more than six months from the committal date, the charges must be dismissed on the basis of the lapse of the indictment.
In his application, Tomana attacked Prosecutor-General Ray Goba’s conduct, which ensured that the matter would not proceed.
Tomana was fired in June last year for misconduct and incompetence after a tribunal set by former President Mugabe to probe him recommended his dismissal.
Allegations against Tomana arose sometime in 2004, when Bright Matonga, then chief executive of Zimbabwe United Passenger Company (Zupco), was charged with culpable homicide.
It is alleged that the charge arose from a road traffic accident that claimed the life of magistrate Chipo Chikowore. He allegedly called for the docket and instructed that the charges be dismissed.
In 2006, Matonga was charged with contravening sections of the Prevention of Corruption Act and in December 2008, Tomana allegedly instructed Morgan Dube to drop the charges after plea.
It was also alleged that in 2006, Zupco board chairman, Charles Nherera, was charged with corruption.
Tomana testified as a defence witness and Nherera was sentenced to three years in prison. After sentence, Nherera unsuccessfully applied for bail pending appeal at the High Court. Nherera served his sentence and was released from prison in December 2008.Advertisement

Tomana then was appointed Attorney-General.
He allegedly declared that Nherera was innocent and wrongfully convicted.
The court heard that former Bindura Hospital acting medical superintendent Beauty Basile was charged with criminal abuse of duty but Tomana allegedly ordered the withdrawal of charges after plea on November 24, 2009.
In another case, Patrick Mavros, a gold dealer, was charged with possession of gold without a licence. Mavros admitted to the charges, but Tomana directed that prosecution be declined.