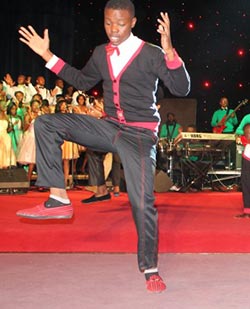 POPULAR interdenominational gospel group, ZimPraise Choir, is set to hold a concert in Bulawayo that will feature some of the country’s leading gospel musicians.
The concert, dubbed, “City of Kings 4 Jesus Concert” will be held at the Zimbabwe International Trade Fair (ZITF) Hall 3 on March 30.
The show will feature Mathius Mhere, Worship Addicts led by Takesure Zamar Ncube, Pastor G and Mechanic Manyeruke, Vocal Ex Choir and the World of Life church choir.
The concert will be held during the World of Life annual conference.
In an interview with NewZimbabwe.com, Tapfuma Chikosha, said the show was part of their mission to spread the gospel of Jesus Christ.
“We are still continuing with our theme from last year which is, All about Jesus and we are taking the word of God to the City of Kings, Bulawayo. It has been long overdue since we had a show in Bulawayo,” said Chikosha.
Chikosha said the sought-after music group will belt out some of its popular gospel tunes, that have earned them country-wide recognition.
“We may just throw in a bit of surprises for the fans because we are already working on a new album. They should also expect what they already know as they have been waiting for it for a long time.
“In this show we will basically showcase what Zimpraise is best known for and the reason why we have brought in other artists like Baba Manyeruke is because these are people that we respect in the music industry and we really want them to be involved in everything we do. This is a form of appreciation,” he said.
Zimpraise – Sungano