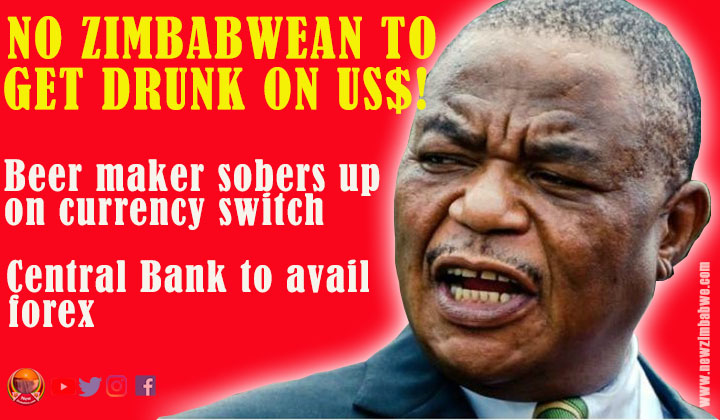 ZIMBABWE’S leading beer and soft drinks manufacturer Delta Corporation Limited was Thursday forced to abandon its plans to start charging its products in US dollars following immense pressure by government.

The company announced the development in a joint statement with central bank governor John Mangudya Thursday.

“Delta withdraws the notice of selling its products exclusively in foreign currency in the spirit of multicurrency framework,” read the short statement.

The top brewer on Wednesday sent panic waves within both government corridors and the local retail market when it announced it shall, beginning this Thursday, start charging all its products in the more stable US dollars.

The privately owned firm cited the need to acquire the much needed forex in order to keep its operations moving in the wake of a forex crunch that has seen the company failing to meet customers’ orders.

Delta said it was not privileged with central bank facilitated access to forex like other sectors and had also refrained from the acquisition of hard currency from the black market.

Attempts to peg its products in forex elicited fervent reactions from government which described the move as ill-thought and illegal.

But in what looks like an audaciously solicited change of heart, Delta Corporation chief executive officer, Pearson Gowero said the notice has been withdrawn in the “spirit of multicurrency framework”.

This follows a meeting convened by Acting Vice President Constantino Chiwenga with the company as well as the Reserve Bank of Zimbabwe at government’s Munhumutapa offices Thursday.

“The Reserve Bank of Zimbabwe will endeavour to provide foreign currency required to ensure that Delta continues on the current basis,” said the statement.

In attempts to remedy a crisis that has seen prices escalate while coupled with a prolonged strike action by public hospital doctors, Chiwenga, who is substantive VP, has threatened to pull the plug on perceived anti-government forces.

When Delta announced it was switching to US dollar transactions Wednesday, Industry Minister Mangaliso Ndlovu reacted angrily, describing the decision as “illegal” while accusing the local company of taking advantage of government’s benevolence in allowing open market economy with little interference from the state.

“This is not only against the spirit of fairness, but it is also an illegal practice,” Ndlovu said.

“Government is very clear that this practice is unacceptable and has to stop forthwith and if not, the law will take its course.”

Delta imports its concentrate from Swaziland and it requires $2 million per month to buy it and granules used to manufacture plastic bottles used in packaging.

By announcing its foiled bid to change its books to US transactions, Delta may have been inspired by current Industry Deputy Minister and Bulawayo businessman Raj Modi who charges his beer products in US dollars.