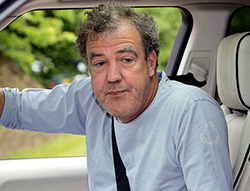 THE BBC has suspended Top Gear host Jeremy Clarkson following a “fracas” with a producer, reportedly over an argument about catering.
According to the Daily Mirror the producer involved in the alleged bust-up, said to have taken place after filming in Newcastle, has been named as Oisin Tymon, 36.
Meanwhile, an online petition calling for the 54-year-old’s reinstatement soared past 130,000 signatures.
The presenter has lurched from controversy to controversy in recent months – offending foreign diplomats, viewers, MPs and his own bosses at the BBC.
Clarkson’s first public response to his suspension was simply a tweet issuing a mock apology to Ed Miliband, who had allowed a media insight into his family life today.
He said: “Sorry Ed. It seems I knocked your ‘I’m a human’ piece down the news agenda.”
A BBC spokeswoman said: “Following a fracas with a BBC producer, Jeremy Clarkson has been suspended pending an investigation.
“No-one else has been suspended. Top Gear will not be broadcast this Sunday. The BBC will be making no further comment at this time.”
It is understood that all three remaining episodes of the series have been postponed by the BBC.
The Mirror reported the “fracas” was over a lack of catering, with the paper quoting a source as saying: “They came to the end of filming after a long day and Jeremy discovered that no food had been laid on.”
The presenter then “snapped”, the source added.
But according to the Sun newspaper, Clarkson said: “I’m having a nice cold pint and waiting for this to blow over.”
Meanwhile, a source told the paper: “He didn’t punch anyone.”
Spirits did not seem to be too downtrodden in the Clarkson camp, as the presenter’s daughter Em Clarkson tweeted: “Oh God, BBC please take him back… He’s started cooking…”
This Sunday’s episode was set to feature Clarkson with co-hosts Richard Hammond and James May getting to grips with classic cars such as a Fiat 124 Spider, an MGB GT and a Peugeot 304 cabriolet.
They were set to take to the road and end up at a classic track day, while Gary Lineker was due to be the “star in a reasonably priced car”.
Advertisement

Clarkson was put on what was called his final warning last year following a racism row after claims he used the n-word while reciting the nursery rhyme Eeny, Meeny, Miny Moe during filming of the BBC2 programme.
North Yorkshire Police was reportedly inundated with enquiries about whether the alleged incident had taken place in the Hawes area of North Yorkshire.
The force said in a statement: “There has been suggestions that the alleged ‘fracas’ occurred in the Hawes area.
“We can confirm that no complaints have been reported to North Yorkshire Police.”
Clarkson’s had initially failed to acknowledge news of his suspension, instead joking with colleagues Richard Hammond and James May on Twitter about what should be done with now-empty slot on the BBC’s schedule this Sunday.
May tweeted to his co-stars: “No Top Gear this weekend, apparently. How about 633 Squadron instead?”
To which Hammond replied: “No, surely, Last of the Summer Wine; no-one will notice the difference. Job done.”
And Clarkson added:” I did some pretty good war documentaries. They could screen one of those.”
Fans also started a campaign on the social media site using the hashtag BringBackClarkson, with a Change.org petition started by political website Guido Fawkes that neared its intended target of 150,000 signatures overnight.
In response, May tweeted: “Save Clarkson? Save empty cardboard boxes and off-cuts of string. They’re far more useful.”
In recent years Clarkson has been cleared of breaching the broadcasting code by watchdog Ofcom after comparing a Japanese car to people with growths on their faces.
And he faced a storm of protest from mental health charities after branding people who throw themselves under trains as ”selfish”.
He was also forced to apologise for telling BBC1’s The One Show that striking workers should be shot, but it is the claims of racism that have really damaged his standing with the corporation.
Top Gear is one of the BBC’s biggest money spinners, pulling in millions of pounds from a devoted – and international – audience.
Its latest series was given a global launch with a simultaneous broadcast in more than 50 countries.
Its success – and Clarkson’s vital part in it – saw BBC TV boss Danny Cohen compare him to a top-flight footballer, telling reporters last year that “no-one is bigger than the club”.
Last year, the show was censored by communication regulator Ofcom for breaching broadcasting rules after Clarkson used a “racial” term during the programme’s Burma special, which had aired in March 2014.
The year ended with the motoring show’s crew forced to flee Argentina after trouble erupted when it emerged they were using a Porsche with the registration number H982 FKL, which some people suggested could refer to the Falklands conflict of 1982.
But each episode in the two-part Christmas special attracted more than seven million viewers last year, with a further three million for each episode on iPlayer.
Top Gear’s executive producer Andy Wilman described last year as “an annus horribilis” for the show after the claims of racism and the near-riot in Argentina.
It is difficult to find exact figures, but it is safe to say the show has made Clarkson and Wilman multi-millionaires.
The 2012 annual report and accounts of BBC Worldwide – the corporation’s commercial arm – show it got a dividend of £4.5 million in 2012 from a company called Bedder 6.
The company, which is registered at the west London base of BBC Worldwide, was set up by Clarkson and Wilman.
The BBC owns 50%, with Clarkson reported to own around 30% – which would mean his dividend would have been around £2.7 million in that year, on top of a BBC salary.