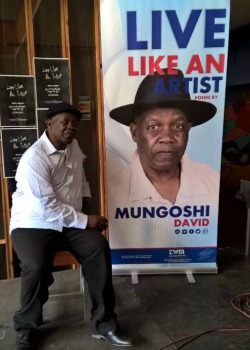 ONE of Zimbabwe’s most prolific writers, David Mungoshi, has been awarded the Pan African Writers Association (PAWA) Patron of the Arts Award and the PAWA Honorary Membership Award for his contribution to the development of African Literature.
In a letter to Mungoshi gleaned by New Zimbabwe, PAWA Secretary General, Atukwei Okai, said the awards will be given as part of the celebrations of the 24th International African Writers Day and the 28th Anniversary of the PAWA Life Time Achievements Awards, where a select number of African writers will also be presented with PAWA Honorary Membership Awards.
He said a select number of African writers will be honoured at an awards dinner which will be held from 5 to 7 November during the PAWA Continental Colloquium which will run under the theme; “Language, Library and the Book Industry; The Urgent Agenda for Africa’s Destiny.”
“PAWA Headquarters is planning an Awards Dinner to be held on November 5-7 in Accra. Also, eight dignitaries will be recognized for their contribution to the development of the African Literary world with the PAWA Patron of the Arts Awards.
I am glad to inform you that your years of creative labour and achievements have placed you firmly among those distinguished of Africa and the African Diaspora to be lauded,” he said.
Okai expressed hope that Mungoshi would accept “our modest token of appreciation on behalf of African Writers and the African people in recognition of your invaluable contribution to the development of African Literature.”
The PAWA Patron of the Arts Award comprises of a Diploma, a plaque of the APWA Emblem, a gold medal and the PAWA Stool of loyalty, with the PAWA emblem carved on it.
Mungoshi, who is the current PAWA Vice President for Southern Africa, also works at the Department of Linguistics at the University of Zimbabwe.
He told New Zimbabwe that when he started writing he never contemplated that he would conquer the world as he only wanted to tell what was in his head.
“Of course that changed with time. However, recognition of any sort comes and when it comes there is very little that one can do at the individual level until others begin to notice. In my teaching at various levels throughout our school system, creativity and fictional writing have always played a pivotal role in my pedagogy,” he said.Advertisement

He added, “I was most fond of applying the principles behind what Windows on, a prominent linguist calls rhetorical transformation by gradual approximation. Essentially we are talking at modelling here as a trigger of creation and ultimate excellence”.
Mungoshi said he used to use fictional writing to situate his teaching when he taught Communication skills at the University of Zimbabwe’s Faculty of Law and later grew interest in writing legal thrillers in the manner of John Grisham and others.
“So it is gratifying when former students of mine in the Faculty of Law tell me they have just written something in the form of a book and are being published and they cite me as their mentor. I understand that a former veterinary science student of mine has recently discovered the joy of poetry and its relevance to his chosen career.
“Again, this is quite gratifying given that when I embarked upon the Vet Science poetry project there was quite a bit of consternation among my students. Now this guy is threatening to write something; so I wait with bated breath,” he said.
Mungoshi said he had also mentored primary school pupils and teenagers to commit their thoughts and experiences to paper.
“I have together with others like Memory Chirere, Bonaventure Honzeri, Kenneth Ruchaka and Gilbert Mzembi Mabasa, now principal of a polytechnic somewhere in this country, and Philemon Chitukutu, participated in writing projects which in the end yielded a total of eight books written by the publisher and the teenagers respectively,” he said.
Past recipients of the PAWA Patron of the Arts Awards include slain former Libyan President Muammar Gadhafi, former Nigerian President, Goodluck Jonathan, President Abdou Diouf of Senegal, and the late Nigerian author, Chinua Achebe among others.