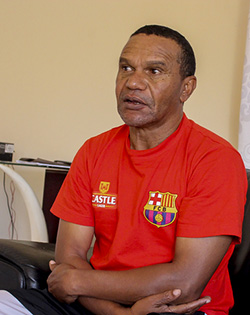 THE championship race enters a decisive stage on Wednesday with leaders Chicken Inn facing second placed FC Platinum in a Castle Lager Premiership at Luveve that could decide the destiny of the title.
With defending champions Dynamos stuttering to a 1-1 draw to relegation threatened Flame Lily on Saturday, the development threw the championship into a two horse race between Joey Antipas and Norman Mapeza.
Antipas, whose side Chicken Inn, had five players in the national team leading to the postponement of their league clash against FC Platinum, said the absence of the five players will affect his side.
“Obviously their absence has affected us because you always need all your players when preparing for games like this,” said Antipas.
“We will have to wait and assess them when they return from national duty. FC Platinum is in top form and they will be difficult to break down. We beat them 2-1 last time out but a lot of things have changed since then.
“They will not be easy opponents for us and whoever will win this tie will have lots of confidence going into the last four matches.”
The five players that travelled to Maseru for the 2016 Rwanda Chan finals include captain Danny Phiri, striker Edmore Chirambadare, Lawrence Mhlanga, Tafadzwa Kutinyu and goalkeeper Elvin Chipezeze who were all with the national team.
Chicken Inn are at the top of the league table with 52 points from 25 matches while FC Platinum trail behind on 48 points despite the fact that both teams were inactive at the weekend.
Defending champions Dynamos – who drew 1-1 against lowly Flame Lily on Saturday – are in third place with 47 points from 26 matches.
Reigning coach of the month of the month Norman Mapeza is the only coach who has not lost a match in the last five league matches winning four and drawing one while Chicken Inn lost one and won the other four.
Dynamos lost one, won two and drawn two of their last five matches.
In another midweek fixture Highlanders travel to Ascot for a date against Chapungu hoping for better fortunes as they seek to finish in a respectable position.
This is after a disastrous campaign that has left them a distant 10th position on the league table with 31 points from 25 matches with only five matches left before the end of the season.Advertisement