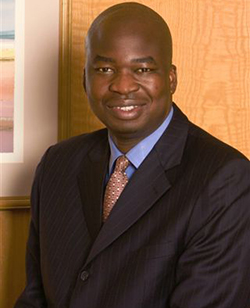 BARCLAYS Bank has warned that weaker financial institutions may struggle to stay viable as top tier banks compete with foreign banks that have increased their exposure on the domestic market offering below-market interest rates to firms with strong business models.
Managing director George Guvamatanga told the ongoing Imara Investment Conference in Harare that some highly capitalised local financial institutions have lowered lending rates to below seven percent per annum from a sector’s average of nearly 20 percent after local firms turned to offshore funding to oil operations.
Guvamatanga said Barclays sees its interest income growing significantly this year driven by an aggressive lending approach to creditworthy businesses and individuals at a time most institutions have taken a cautious approach due to toxic loans stemming from chronic liquidity constraints on the domestic market.
Zimbabwe’s bad-loan ratio marginally improved to 15 percent at the end of the first quarter of 2015, from 16 percent at the close of last year, according to central bank data. The country’s regional peers’ non-performing loan ratios are typically in the single-digit range.
Guvamatanga said stable companies have found alternative ways of funding their operations forcing banks to lower interest rates below market averages.
This emerging trend, he said, could eat into the margins of weaker banks with high operating costs.
“We have had some corporates going offshore and accessing money at rates just below seven percent, some even at rates below six percent (per annum).
“So we have had to also review our own rates and start competing with those offshore sources of funding,” Guvamatanga said.
“So there are corporates accessing funding today from local banks’ balance sheets at interest rates below seven percent so it has become very competitive.
“But the challenge that most institutions will face is that if your cost base is seating up there in the sky and the margins are dramatically reducing as we are seeing, it will become very difficult for the smaller institutions to remain viable and to remain competitive especially if they cannot have access to cheaper sources of funds.
“It means that you cannot compete for top tier business.”
Barclays Plc owns 68 percent of Barclays Zimbabwe.Advertisement

Guvamatanga said the bank is targeting a loan to deposit ratio of 70 percent from 59 percent as at December 2014.
The bank’s loan to deposit ratio has been gradually increasing from 17 percent at the introduction of the multi-currency regime in 2009 to 41 percent in 2012 before further climbing to 47 percent in 2013.
Barclays’ loan loss ratio has been constant at 0,6 percent over the last three years from a negative 1,6 percent in 2009 at a time some weaker banks have gone under due to bad loans and shareholder delinquency.
Guvamatanga said Barclays is also considering going into mortgage finance to grow its revenue flow saying the current terms prevailing in the market are unsustainable for potential homeowners and the financial institutions.