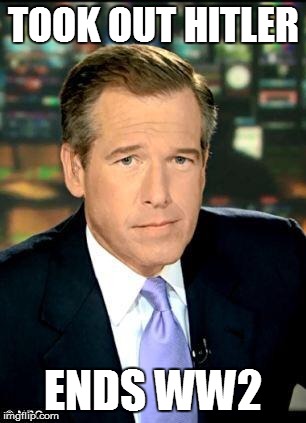 US commercial broadcaster NBC announced Tuesday that it is suspending Brian Williams as “Nightly News” anchor and managing editor for six months without pay for misleading the public about his experiences covering the Iraq War.
Chief executive Steve Burke said Williams’ actions were inexcusable and jeopardized the trust he has built up with viewers during his decade as the network’s lead anchor. But he said Williams deserved a second chance.
Williams apologized last week for saying he was in a helicopter that was hit by a grenade while covering the Iraq War in 2003. Instead, another helicopter flying ahead of his was hit, and some veterans involved in the mission called him out on it. The swift public reaction had put NBC News on a crisis footing.
NBC News President Deborah Turness said in a memo that Williams “misrepresented” events that occurred while he was covering the war.
“It then became clear that on other occasions Brian had done the same while telling that story in other venues,” Turness said. “This was wrong and completely inappropriate for someone in Brian’s position.”
Turness said Lester Holt would continue to substitute for Williams as anchor.
While NBC News avoids a backlash from Williams’ supporters, the action jeopardizes the network’s competitive position.
“Nightly News” has been atop the ratings dating back to Tom Brokaw’s time in the anchor chair more than a decade ago. But ABC’s “World News Tonight,” with new anchor David Muir, has been gaining in second place, and Scott Pelley has built a newscast that appeals to traditionalists at CBS.

Besides veterans angered by Williams’ false story, his initial apology made him a target of online ridicule with his claim that he misremembered key details. Internet memes jokingly placed Williams at the scene of other events including the Last Supper or the first walk on the moon.
“The penalty is tough, which it should be,” said Bill Wheatley, a longtime NBC News executive who now teaches journalism at Columbia University.
“When he comes back on the air, it will be up to Brian to demonstrate to his viewers and colleagues that he deserves their trust. I believe that if he works hard and focuses on his journalism, they’ll forgive him.”Advertisement

Williams received some key support in the last 24 hours. Fox News Channel host Bill O’Reilly, frequently a critic of NBC News, suggested on Jimmy Kimmel’s show that Williams should keep his job unless more stories come out. Columnist David Brooks in The New York Times suggested there was a need for forgiveness in instances of wrongdoing.
Jon Stewart, of “The Daily Show,” who has hosted Williams as a guest 22 times, criticized Williams for vanity. But he had sharper words for media outlets going after Williams.
“I am happy,” Stewart said. “Finally, someone is being held to account for misleading America about the Iraq War.”
Similar uncharted territory for NBC News and Williams is how they handle his return in six months — does he simply come back to work or does he offer a detailed interview on NBC or with another, impartial source?
“Can Brian Williams come back? Maybe,” said Jeff Greenfield, former CNN and CBS News reporter and commentator.
What will be interesting for Williams is how he spends the six months, whether he does volunteer work, helps veterans’ groups and seeks professional help for a tendency to embellish stories, he said. Whatever he does, it will be watched closely.
Williams recently signed a contract extension to coincide with last year’s 10th anniversary as anchor. His suspension will cost him several million dollars.
Even with the suspension, Turness said the network’s probe into Williams’ statements is continuing.
Shortly after it happened during a reporting trip to Iraq in 2003, Williams explained on NBC that one of a group of helicopters he had been flying with had been hit by a rocket-propelled grenade.
When he appeared with David Letterman a decade later, the story changed to his helicopter had been hit, which Williams now admits is false. It wasn’t until he told the story on “Nightly News” last month and veterans who had been there complained that the embellishment emerged.
In Israel in 2006, Williams explained to his news viewers that he’d been on an Israeli helicopter and saw a trail of smoke and dust where Hezbollah rockets had landed in the Israeli countryside, and he described seeing rockets being launched 6 miles from his location.
The story became more dramatic when he appeared on “The Daily Show” a month later.
“Here’s a view of rockets I have never seen, passing underneath us, 1,500 feet beneath us,” Williams said.
“And we’ve got the gunner doors on this thing, and I’m saying to the general, some four-star, ‘It wouldn’t take much for them to adjust the aim and try to do a ring toss right through our open doors, would it?'”
An Israeli army official who travelled with Williams that day, Jacob Dallal, on Tuesday called the anchor’s account “generally reasonable.” He said it was fair to assume rockets flew beneath their helicopter.