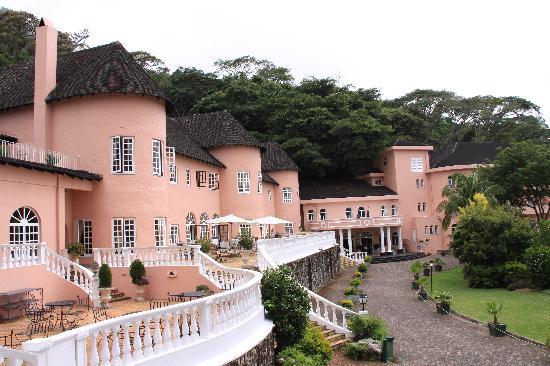 MUTARE: A top Eastern Highlands resort, Leopard Rock Hotel Saturday morning sacked 15 interns who were conducting work-related learning for failure to reveal the person who had broken a teapot lid.

The exclusive resort is located 30km southeast of Mutare in Vumba.

The interns started their attachment at the diverse holiday centre in January and in June this year.

They faced the chop on the grounds they had failed to observe fundamentals of hospitality which entails protection of the hotel’s property.

Fuming with anger, Shasha delegated his head chef to inform the students that failure to reveal the person who had broken the tea-pot cover, in an hour’s time would result in termination of their work.

According to the hotel boss, the students were in collusion which threatened the interests of Leopard Rock and its guests hence their continued presence would promote the habit of covering up each other.

“If the person or persons responsible for breaking the teapot cover (which I found at the washing bay yesterday morning) has not come forward, please send all your trainees and all service trainees home,” a WhatsApp chat sent by Shasha to his head chef and gleaned by NewZimbabwe.com reads.

“They should pack as they will no longer be working at Leopard Rock. The person has one hour to present themselves. I am sorry to inform all F and B trainees that their stay here will be terminated.

“All references and recommendations will include a mention that the individual was not cooperative in identifying the person or persons involved in breakages.

Shasha made a solemn promise that if the affected students needed any recommendation from the hotel he would personally indicate that the individual was not cooperative in identifying a person who had broken the hotel’s property.

The students who were affected by the owner’s decision were attached to the kitchen, bar, and restaurant.

One of the affected students who spoke to NewZimbabwe.com on condition of anonymity said their former boss made a decision to oust them for failure to reveal the culprit who had broken the tea-pot lid.

“We were surprised to hear that our boss had terminated our work-related learning period on the basis of being reluctant to identify the culprit who had broken the tea-pot cover. He instructed the human resource officer, Wilfred Munetsi, together with a security guard to thoroughly search our barracks before we collect our belongings so as to ensure that we do not take anything hotel belongings,” said the affected student.

“Mr Munetsi was ordered to give us US$40 each as our month’s allowance before we leave the premises. Martha who hailed from Bulawayo begged to sleep for a night and was allowed.

“On the following day, she had  to hunt for transport to return her back to her base in Bulawayo using the meagre US$40 she had been given.”

However, when contacted for comment, Shasha told NewZimbabwe.com that breakages in the kitchen were not recorded despite that items are often broken.

He said the students failed to follow operational procedures hence they do not belong to the hospitality industry and Leopard Rock hotel in particular.

” It was clear that they all in unison decided to cover up the culprit. Basically, that individual was willing to see all his or her colleague’s attachment being terminated thereby evading rebuke for not recording the breakage,” said Shasha.

“They were told by Munashe and Martha the previous day that if the person doesn’t come forward they will all have their training terminated. The point is items are broken all the time and there is a sheet in the kitchen to record all breakages yet it was not filled in.

“They decided not to reveal the person they knew had jeopardised hotel property without reporting. If they cannot do that, they don’t belong in the industry,” fumed Shasha.

Asked if the dismissal of trainees over a broken tea-pot cover wasn’t so trivial, Shasha did not turn back saying the students had agreed to “meet fire with fire”.

“What upset me initially was that they claimed they were given only an hour.  They had a full day, the whole night, and the next day to establish a position and they obviously took a confrontational decision. If I changed my position, I would simply have chaos.

“I could not use a selective approach to dismissal as I thought they would impress on the person who broke the item to come forward and admit to it, but that didn’t happen.

“I would never have any level of discipline if I backed down. So, the issue is whether collectively punishing all of them was justified or not. I could have understood it if the responsible person would have been punished and it is proven that no one recording breakages has ever been punished before. So the decision to close ranks was effectively a threat,” said the exclusive Eastern Highlands resort owner.

The highlight of Leopard Rock is a world-class golfing green which was listed in 2013 by CNN Travel as one of Africa’s top ten.

The hotel overlooks a stunning lake which is the centerpiece of an 18-hole golf course.

A drive up to the Leopard Rock offers guests an opportunity to take in the beautiful scenery of the Bvumba mountain range and the greenery surrounding it.