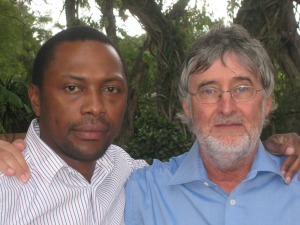 TWO of Zimbabwe’s foremost poets will this week launch their latest anthology, Textures.
Togara Muzanenhamo and John Eppel, accomplished wordsmiths in their own right, have combined in this literary project that seeks to add value to the country’s literature literary landscape.
The new collection will be launched at two separate events in Bulawayo.
The first launch will be held on Thursday March 19 at Christian Brothers College and the second on the following day at Indaba Book Cafe.
In an interview with NewZimbabwe.com, the publishers said it was exciting to see the two poets combining efforts to launch the anthology.
Brian Jones, the co-director of AmaBooks, expressed confidence that the Zimbabwean audience will appreciate Muzanenhamo’s contribution, as his work has previously been well received by foreign audiences.
“We are very pleased to be launching this collection by the two poets. Eppel’s poems, short stories and novels have been published on many occasions in Zimbabwe, but we feel these poems represent some of his best work.
We were particularly keen to bring Muzanenhamo’s poetry to the attention of a Zimbabwean audience, as his two previous collections of poetry had been published by a UK publisher, Carcanet. Both poets are accomplished wordsmiths and we think that this collection will be a valuable addition to the Zimbabwean canon,” said Jones.
Both Muzanenhamo and Eppel pay great attention to poetic craft and universal themes are seen in their work – life and death, love and loss among them.
At both launches, poet lovers should expect to hear the two wordsmiths read some of their work.
“Both poets will read from Textures at both events and it is a chance for the poetry-lovers of Bulawayo to hear two skilled poets share their work. We hope that the Bulawayo public will come out to enjoy these two evenings of words.
Textures is also available outside of Africa through the African Books Collective, through Mega Books in South Africa and in many outlets across Zimbabwe,” he said.
John Eppel is a prolific writer, publishing his first poems in the 1960s, and many since in numerous anthologies and online. He has had four collections published, the first winning the prestigious Ingrid Jonker Prize for Poetry.Advertisement

Recently he has worked with the late Julius Chingono and with Philani Nyoni to produce the collaborations Together and Hewn from the Rock.
Togara Muzanenhamo has had two collections of his work published, both in the United Kingdom, as well as individual poems in many anthologies, magazines and online.
In 2012, he was the Zimbabwe’s representative at Poetry Parnassus, the greatest gathering of poets in history, held during the London Olympics.