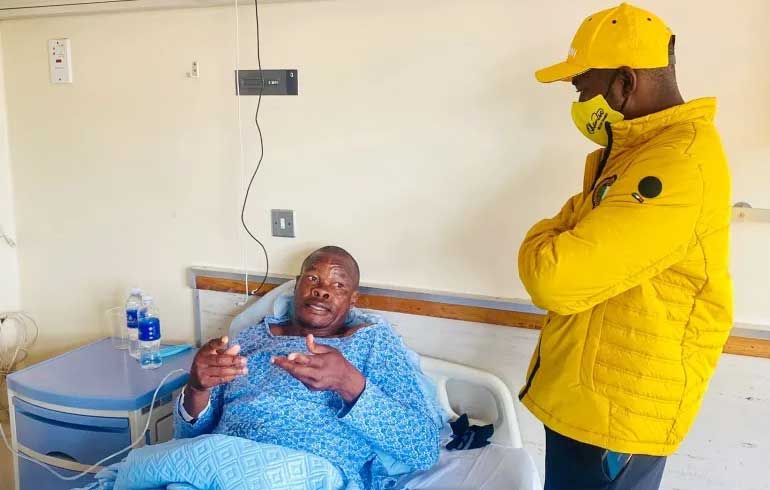 CITIZENS Coalition for Change (CCC) activist Godrey Karembera yesterday appeared before Harare magistrate Barbara Mateko at Parirenyatwa hospital where he is receiving treatment after he was assaulted by the police following his arrest on Thursday on charges of disorderly conduct.

This comes as police said they must be given ‘space’ in their investigations into allegations of the torture which occurred while he was in custody at Harare Central Police Station.

His lawyers were denied an opportunity to file an application challenging his placement on remand after the torture.

“Essentially we sought to challenge his placement on remand and to raise our complaints to the state (yesterday), but the magistrate refused to allow us and said we should make such an application on Monday,” Karembera’s  lawyer Doug Coltart said.

On Friday, the Information and Publicity ministry on Twitter said some police officers had been arrested for assaulting the CCC activist.

In a bizzare twist, the ministry deleted the tweet after about an hour.

“As part of their investigations into allegations of ill treatment of a suspect in custody, some police officers have been arrested,” the ministry tweeted.

“We will release more information when it becomes available.”

On the day Karembera was seized by the police on the streets of Harare and tortured in custody, the ministry tweeted: “We have seen allegations of someone being ill-treated in police custody. Facts are currently being gathered and once information becomes available, it will be released to the public.”

“We made it clear from the onset that we are investigating allegations that Karembera was beaten by police officers and we will make sure that the law takes its course,” Nyathi said.

“So we would like to appeal to the members of the public including the media to give us the space to conduct investigations.

“We also want to try to avoid investigating the case while at the same time we are giving every bit of information to the media.

“But I can assure you that everything is being done above board.”

In the run-up to Saturday’s by-elections in 29 parliamentary constituencies and over 100 wards, security forces have been accused of unfairly treating CCC by blocking its campaign rallies and arresting the party’s candidates and supporters on trumped up charges.