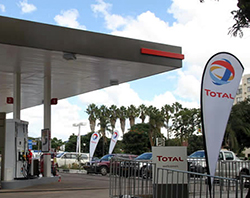 THE local unit of international energy firm Total says it expects to maintain its dominance in the country’s fuel industry despite the re-emergence of foreign competition as government plans to re-introduce mandatory blending.
Total Zimbabwe managing director Christopher Okonmah last week told journalists that the company would maintain its market share at a time local fuel players are folding, resulting in international brands coming into the market.
“We do not see ourselves revising our market share. At the moment we are the market leader and we do have over 24 percent of the market,” Okonmah said at the launch of the group’s solar lantern products.
“Competition is good for the country and it will keep all of us on our toes.”
He said the company has invested $1 million into the project and is targeting to sell 100,000 units this year.
Global commodities giant Trafigura has, through its Puma Energy brand, taken over the country’s second largest oil marketing company Redan Petroleum and Sakunda, signaling the comeback of big players into the industry.
Engen is another international energy brand that has expanded operations in Zimbabwe over the past few years following the retreat of brands such as Chevron and BP Shell.
Through the Redan acquisition, Puma acquired 62 service stations across the country, compared to Total’s 100.
Speaking on the sidelines of the launch, deputy energy minister Tsitsi Muzenda said the petroleum industry was within the next month expected to resume ethanol blending after production at Green Fuel improved.
The firm, a joint venture between government’s Agricultural and Rural Development Authority (Arda) and businessman, Billy Rautenbach’s Macdom and Rating Investments, commenced operations over five years ago and has to date invested $330 million in its operations.Advertisement