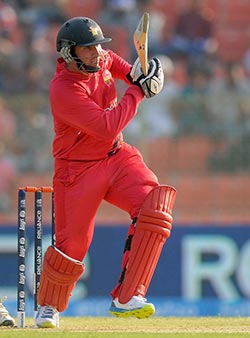 BRENDAN Taylor’s anger with himself was splattered all over his face as his under-arm throw missed the stumps. It was the last ball of Zimbabwe’s first World T20 qualifier against Ireland and the Zimbabwe captain’s wide throw gave the opposition the game.
His eyes darkened and his face reddened, almost to the colour of his shirt, as he saw Stuart Thompson crash into Tinashe Panyangara and Alex Cusack sprint to the other end.
Taylor’s expression said he knew the chance to take the game to a Super Over had been handed to him and he knew he gave it away. He did well not to yell at himself when he was asked about it, even though he took the blame.
“I had a good feeling that it was going to be a Super over but it was not to be,” Taylor said.
His anger with the rest of his team was a little more well-hidden.
Taylor was irritable with them for putting themselves in a situation where they needed a Super Over and it lasted a little longer than his annoyance with himself.
Taylor was concerned with his team’s performance from the half-time break when he declared their total, “20 runs short.”
His bowlers ensured Zimbabwe were lacking by much fewer than that and could have made 163 enough but after their valiant efforts in the last six overs, Taylor was still upset the batsmen hadn’t done enough.
“To defend 160, it was always going to be difficult. But, we showed some character to bring it back,” he said. “With guys getting out for 15 or 20, it was always going to be tough to rebuild with the new batter coming in.”
He asked them to place more value on their time in the middle to avoid giving themselves too much to do in the latter overs.
“They need to put a high price on their wickets and have to step up. There is no point leaving it for the next man coming in because he takes five to six balls to get going, so the game stop-starts,” Taylor said.
Zimbabwe’s scoring rate started healthily with 56 runs coming in the Powerplay but they stagnated against Ireland’s spinners.
In frustration, they tried to hit out and Sikandar Raza, Hamilton Masakadza, Taylor himself and Vusi Sibanda were all caught aiming to go big, something Taylor was not happy about.
“Batters were a bit soft with their dismissals,” he said. “Mentally, we need to toughen up little bit. If you get yourself in, you need to kick on or else you are making it difficult for the team.”Advertisement

In the end, it was up to the finisher Elton Chigumbura to do just that. He also left it late, waiting until the last over to lash out but showing the temperament to bat longer. Despite that, Taylor said he will not be tempted to move Chigumbura up the order.
“I genuinely believe that the guys who bat in top four can hit the ball very hard and can make it really difficult for the bowlers,” Taylor said. “If someone in the top four bats through, we will have a competitive total.”
Zimbabwe will need to do more than just compete if they hope to play in the main draw of the tournament. They have to win both their remaining matches and hope Ireland slip up along the way.
At least they have now had enough of a look at the conditions at the new Sylhet stadium – hosting its first international – to know what to expect for the rest of the week.
Taylor had summed up the surface as being “a bit slower for the spinners in the afternoon,” but offered something for everyone throughout the encounter.
“It (the ball) got a bit greasier under lights but the ball started swinging too. We found we were in the game all the time.”
Taylor described the venue as a “lovely stadium,” and he and his team enjoyed what was a “great opportunity to play here.” At least that was something he did not have to get angry about.